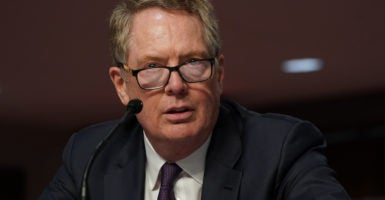 New Jersey Sen. Robert Menendez had asked Lighthizer, a well-known critic of the Chinese government, about an excerpt from Bolton’s book in which he alleged that Trump asked Xi for election help during a meeting in Japan on the sidelines of the Group of 20 summit in June 2019.

“Trump then, stunningly, turned the conversation to the coming U.S. presidential election, alluding to China’s economic capability and pleading with Xi to ensure he’d win,” Bolton wrote in an excerpt published by The Wall Street Journal.

“He stressed the importance of farmers and increased Chinese purchases of soybeans and wheat in the electoral outcome. I would print Trump’s exact words, but the government’s prepublication review process has decided otherwise.”

Lighthizer told Menendez that he was in the meeting in question and that Bolton’s allegation was “completely crazy.”

“Would I have recollected something as crazy as that? Of course I would,” Lighthizer said.

Bolton makes numerous other bombshell allegations against Trump in his book “The Room Where It Happened.” He accuses his former boss of appeasing foreign dictators such as Xi, Turkish President Recep Tayyip Erdogan, and Russian President Vladimir Putin.

Bolton also claimed that top Trump administration officials, including Secretary of State Mike Pompeo, were highly critical of the president during private conversations.

The Trump Justice Department sued Bolton on Tuesday to delay the release of the memoir, which is set for release on June 23.