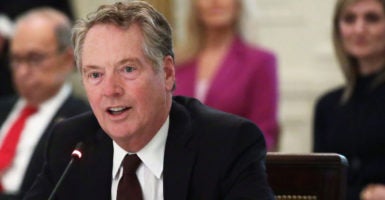 Lighthizer gave Congress a look at what might be to come in his recent piece in Foreign Affairs, in which he proposed a worker-focused trade policy for the U.S.

It is a unique time for Congress to have the opportunity to hear from and question Lighthizer.

The United States-Mexico-Canada Agreement is set to go into effect July 1.

The success of the Phase 1 deal with China is largely being questioned because recent trade numbers show that China is not on trend to meet its 2020 purchasing commitments.

The future of the World Trade Organization remains uncertain now that its appellate body is unable to function.

Meanwhile, the Office of the United States Trade Representative has formally notified Congress on trade negotiations with the United Kingdom, the European Union, and Kenya.

There will be quite a lot of ground to cover. Here are five questions that should not go unanswered:

At the end of the day, U.S. trade policy should be geared toward increasing the freedom of individuals to buy and sell with the world, free from government intervention.

These hearings, which take place annually, are a great way for Congress to exercise oversight over the executive branch and remind the administration that the power to regulate trade lies with Congress.