As South Korea Cracks Down on Sexual Exploitation Online, More Must Be Done to Fight Human Trafficking 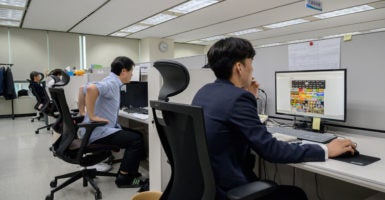 The Nth room scandal, where victims are coerced to perform horrific sex acts, made South Koreans aware that penalties for sex trafficking are too lenient. Pictured: Emolyees in an office of the Korea Communications Standards Commission in Seoul, seen Nov. 8, are tasked with hunting down and removing internet sex videos posted without consent. (Photo: Ed Jones/AFP/Getty Images)

Hoyoung Chin is a former Asan fellow in the Asian Studies Center at The Heritage Foundation.

Two hundred sixty thousand. That is the estimated number of users of “Nth rooms.”

Nth rooms are chat rooms that illegally produce and sell sexually dehumanizing content in Korea. Those exploited in the Nth rooms may be considered victims of sex trafficking because many were conscripted into the Nth room abuses through force, fraud, or coercion.

All 103 victims, including 26 minors, were referred to as “slaves.”

Victims were blackmailed using private information illegally obtained through hacking or fraud. Then they were forced to perform horrific sex acts for the users who pay cryptocurrency to view it.

Victims were revictimized after perpetrators turned videos aired in the private Nth rooms into public online content and disseminated this degrading content once more.

The Nth room scandal left South Korea in shock. South Korean citizens first became aware of Nth rooms in September 2019, when information about the nature of these underground crimes became public after an investigative report by two university students broke the story.

The report sparked an investigation that led to the arrest of more than 100 people connected with the Nth room scandal, including the ringleader, Cho Ju-bin.

What infuriated Korean society was how lenient current criminal law penalties are for sex traffickers in South Korea.

When the scandal first broke, no law targeted those who possess or watch illegal pornography.

On April 29, Korean lawmakers changed that. They passed the “Nth room” bill to punish perpetrators and protect the victims. The bill included increased statutory minimum sentences for violent sexual crimes and new punishments for those who possess and watch illegal recordings.

As a signatory to the Palermo Protocol, the U.N. protocol on human trafficking, South Korea has a responsibility not only to punish traffickers after a crime has been committed, but to prevent human trafficking from happening in the first place.

Right now, limited provisions are in place to prevent people from being victimized by Nth rooms or other forms of human trafficking—a loophole that South Korean lawmakers should seek to close.

The Nth room phenomenon might be the push that the U.S. and South Korea need to collaborate more to prevent and respond to human trafficking.

The two allies should share best practices and learn from past mistakes to improve responses to the global threat of human trafficking, not only in South Korea and the U.S. but around the world.