Basing Troops in Europe Is About US Security. A Pullout Would Be Unwise. 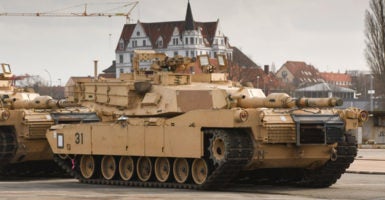 An increased U.S. presence in Europe is necessary to meet the myriad security challenges in the region. Pictured: Armored vehicles of the U.S. Army are unloaded Feb. 21 in Bremerhaven, Germany, as part of the major exercise called Defender-Europe 20. (Photo: Karsten Klama/picture alliance/Getty Images)

Unconfirmed news reports say the Trump administration is considering the withdrawal of 9,500 troops from Germany. If true, that would not be a prudent decision, and ultimately would harm U.S. security interests.

The Trump administration has done much since 2017 to improve security in Europe. Under President Donald Trump, the U.S. has increased funding for the European Deterrence Initiative from the levels of the Obama administration, increased U.S. troop presence in places such as Norway and Poland, pushed for and helped to catalyze defense spending increases in many NATO allies, and greenlighted vital assistance to Ukraine.

The administration’s decisions have helped push back against a revanchist Russia and strengthened transatlantic defense.

As such, it’s all the more puzzling that the administration is considering troop withdrawals from Europe, when in fact an increased U.S. presence is necessary to meet the myriad security challenges present in the region.

The commonly held belief that U.S. forces are in Europe to protect European allies from a threat that no longer exists is wrong. U.S. troops are in Europe first and foremost for U.S. national security interests.

Of course, the presence of U.S. forces in Europe contributes to the collective defense of U.S. allies on the Continent, but that’s a consequence of—not the reason for—maintaining a robust presence.

U.S. bases in Europe provide American leaders with flexibility, resilience, and options in a dangerous multipolar world. The huge garrisons of American service personnel in Europe are no longer the fortresses of the Cold War, but rather the forward operating bases of the 21st century.

The U.S. needs to have the tools available to react to events in America’s interests.

Whether it’s a rapid reaction force the U.S. maintains in Italy and Spain to respond to contingencies in Africa and the Middle East, ensuring for instance that a disaster like Benghazi never happens again; or the U.S. hospital at Landstuhl, Germany, whose proximity to the battlegrounds of the Middle East has saved hundreds of American lives; or a ballistic missile defense system across the Continent that protects U.S. interests from Iranian missile threats, the U.S. is best served by a robust on-the-ground presence in Europe.

The air [and] maritime capabilities are very important, but I would submit that ground forces play an outsize role in conventional deterrence and conventional assurance of allies. Because your physical presence on the ground speaks volumes.

Some studies recently cast doubt on the assumption that rotational forces are more cost-effective than permanently stationed troops and have found that rotational deployments may in fact cost more to maintain.

In Germany, the U.S. maintains vital basing and training ranges, which help deter adversaries and allow U.S. forces to exercise with allies. Germany helps pay for the cost of U.S. basing in the country, contributing $1 billion a year to support these permanent deployments.

The security of the United States begins in Europe. A robust and capable presence of U.S. military forces in Europe is just as important today as it was during the Cold War.

Some of America’s oldest and closest allies are in Europe. The U.S. shares with this region a strong commitment to the rule of law, human rights, free markets, and democracy.

The economies of the U.S. and Europe are deeply and symbiotically intertwined, a strength that will only become more valuable in the face of Chinese pressure and moves toward reconsidering economic reliance on the regime in Beijing.

The U.S. military presence in Europe deters American adversaries, strengthens allies, and protects U.S. interests. Reducing that capability will only make America weaker on the world stage, erode our relationship with critical NATO allies, and invite further aggression from adversaries.