Setting the Record Straight on American Leadership of the West 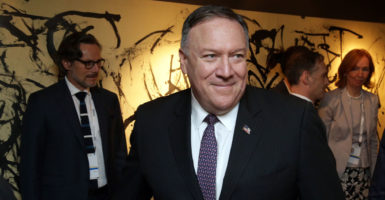 Secretary of State Mike Pompeo attends a meeting Friday at the Munich Security Conference, a day before speaking to the annual gathering. (Photo: Johannes Simon/Getty Images)

Secretary of State Mike Pompeo delivered a powerful defense of American leadership of the West over the weekend at the Munich Security Conference, Europe’s most important annual gathering of national security and foreign policy officials.

Pompeo’s message was vital at a time when some of Europe’s leaders are openly questioning America’s commitment to the transatlantic alliance, presenting a distorted and false narrative that bears no relation to reality on the ground.

The reality, as Pompeo made clear Saturday, is that the U.S. commitment to the defense of Europe and the free world, and the ties that bind both sides of the Atlantic, has never been stronger.

It is simply a myth that the Trump administration has cast aside alliances in favor of an isolationist approach. In a direct riposte to the conference’s theme of “Westlessness,” Pompeo declared: “I am happy to report that the death of the transatlantic alliance is grossly overexaggerated. The West is winning. We are collectively winning. We’re doing it together.”

The secretary of state added:

Freedom and democracy are winning. And by that, I don’t mean just geographical nations. The West doesn’t define a space or a piece of real estate. It’s any nation—any nation that adopts a model of respect for individual freedom, free enterprise, national sovereignty. They’re part of this idea of the West.

The United States has urged NATO on to $400 billion in new pledges. We did this because our nations are safer when we work together and when we field the strongest forces and capabilities. The United States has, too—with our allies—undertaken the most significant reinforcement of NATO’s eastern flank since the Cold War.

Significantly, it is U.S. leaders who are championing the fundamental importance and relevance of the NATO alliance, while French President Emmanuel Macron speaks of the “brain death” of NATO, urging Europe to seek a new path away from the United States and the transatlantic alliance.

The U.S. is firmly committed to Article 5 of NATO’s founding Washington Treaty, which guarantees collective defense among all members. Today, more American troops are on the ground in Europe than under President Barack Obama, and the United States has substantially boosted its military presence in Eastern Europe, with funding for the European Deterrence (Reassurance) Initiative increasing by nearly 50% (or $6.5 billion).

In his speech, Pompeo also underscored the great importance of sovereignty, arguing that “sovereignty underpins our greatness collectively. … Respect for sovereignty of nations is a secret of and central to our success.”

The secretary of state condemned Russia’s continuing occupation of large parts of Ukraine and Georgia, and warned against Russian, Chinese, and Iranian attempts to undermine the sovereignty and security of the free world.

Delivering a crystal-clear message to America’s allies in Europe, Pompeo warned that “Huawei and other Chinese state-backed tech companies are Trojan horses for Chinese intelligence.”

Every administration in Europe should heed this message, especially the British government, which recently made the shortsighted and dangerous decision to invite Huawei to play a lead role in the development of the U.K.’s 5G mobile network, as well as the German government led by Chancellor Angela Merkel, which may go down the same path.

No one should doubt America’s commitment to standing up to all attempts by China, Russia, and other adversaries to weaken the West.

In a key moment of his address, Pompeo announced that, through the International Development Finance Corp. and with the support of Congress, the U.S. intends to provide up to $1 billion in financing to Central and Eastern European countries that are part of the Three Seas Initiative. The aim, he said, is “to galvanize private sector investment in the energy sector to protect freedom and democracy around the world.”

This was a powerful signal to Moscow that the United States will work with its friends at the heart of Europe to reduce energy dependence on Russia and weaken the strategic grip that Russian President Vladimir Putin seeks to wield in the Adriatic, Baltic, and Black Sea regions.

Pompeo’s speech to the Munich Security Conference was a timely reminder that American leadership of the West and the transatlantic alliance remains firmly in place, and that the free world is a safer place with the United States at the helm.

The U.S. and its allies in Europe must work together to defend the principles of freedom, sovereignty, and self-determination that underscore the long-term security and prosperity of the free world. The American commitment to doing so is steadfast and unbroken.

It is time for all of America’s partners across the Atlantic to demonstrate the same.