Is Turnabout Fair Play? Legacy Media Dish Out Scrutiny, but Can’t Take It. 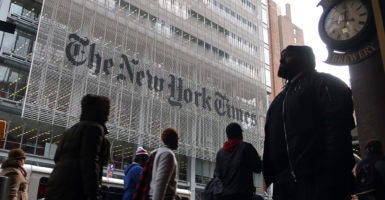 A New York Times report said that "conservative operatives" are attempting to delegitimize legacy media organizations by digging through the social media history of their reporters and editors. (Photo: Gary Hershorn/Contributor/Getty Images)

It seems that working for The New York Times, perhaps the world’s most prominent and powerful media organization, entitles one to a cocoon of privilege, where criticism is equated with tyranny.

The New York Times reported on Sunday that—shockingly—it is looked upon unfavorably by President Donald Trump and that the administration might be working with media and political allies to discredit the Gray Lady.

The Times report began with ominous-sounding language: “A loose network of conservative operatives allied with the White House is pursuing what they say will be an aggressive operation to discredit news organizations deemed hostile to President Trump by publicizing damaging information about journalists.”

The dastardly method these operatives are using to collect this “damaging information” apparently involves scouring old social media posts. The Times said that these so-called conservative operatives have “compiled dossiers of potentially embarrassing social media posts and other public statements by hundreds of people who work at some of the country’s most prominent news organizations.”

Unlike previous presidents—including Trump’s predecessor, President Barack Obama—who have used government agencies to spy on or shut down “enemies” in the press, the Times report says that the conservative operatives have done only opposition research using easily accessible public information.

“They are seeking to harass and embarrass anyone affiliated with the leading news organizations that are asking tough questions and bringing uncomfortable truths to light,” said New York Times publisher A.G. Sulzberger. “The goal of this campaign is clearly to intimidate journalists from doing their job, which includes serving as a check on power and exposing wrongdoing when it occurs. The Times will not be intimidated or silenced.”

These “uncomfortable truths” belong in the light—unless, of course, the light is turned around on those shining it and it reveals something ugly behind it.

A CNN spokesman actually said that the opposition research is a “clear abandonment of democracy for something very dangerous.”

For the defenders of transparency and truth in our nation’s largest and most powerful media organizations, it seemingly signals the end of the republic—or something.

Members of the media, even lower-level journalists, have far more power than the average citizen. The First Amendment protects the freedom of the press, but it doesn’t make journalists a protected class. Why should reporters be shielded from scrutiny?

Even some in the establishment media recognized this obvious fact. As Jack Shafer, the senior media writer at Politico, wrote:

Journalists don’t deserve a get-out-of-bigotry-jail free card just because they’re journalists. If their past tweets, however ancient, undercut their current journalistic work or make them sound hypocritical, they can’t blame their diminished prestige on Trump’s allies.

It’s like blaming a cop for writing you a ticket for speeding in a school zone.

These sorts of journalistic and political tactics aren’t necessarily something to be celebrated, however.

Frankly, the country would be a whole lot better off without this so-called cancel culture, the tactic used to shut down and ostracize those who make the tiniest public or private misstep. It’s a pox on civil discourse.

But if that’s the norm, why should journalists receive special protection that isn’t extended to, say, a forklift driver who made a parody video about House Speaker Nancy Pelosi, D-Calif., or an elderly woman who shared a “Russian-coordinated” event on Facebook?

Was that sort of doxxing speaking “truth to power” or a demonstration of the powerless standing up to the powerful?

The perception is that powerful media institutions and journalists swoop in to discredit anyone who might dare challenge left-wing policies and politicians. Speaking truth to power, in this case, is really about squashing any dissent to reinforced narratives.

The “whining” from The New York Times, as National Review editor Rich Lowry called it, is one of the many reasons the American people have declining trust in large media institutions. They have the incredible power to destroy lives and careers, yet apparently think they have a special privilege—indeed, a right—to be exempted from the magnifying glass they often unfairly turn on everyone else.

In that regard, the national media’s worst enemy isn’t Trump, but themselves.