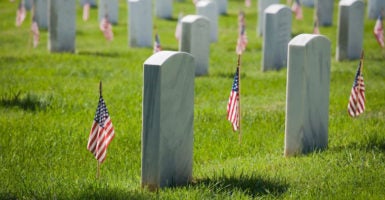 Many Americans, even if they wanted to, might not be able to visit a memorial or a cemetery due to stay-at-home restrictions. Arlington National Cemetery, the final resting place for more than 400,000 active-duty service members, veterans, and their families, is closed to the public, although family members of the fallen can still visit. (Photo: Tetra Images/Getty Images)

This Memorial Day, during the time of COVID-19, will be different from all others.

Many cemeteries likely will have new restrictions, making it more difficult for visitors to pay their respects.

Arlington National Cemetery, the final resting place for more than 400,000 active-duty service members, veterans, and their families, is closed to the public, although family members of the fallen can still visit.

Many Americans, even if they wanted to, might not be able to visit a memorial or a cemetery due to stay-at-home restrictions. Flags normally placed with care at military graves might not be there this year.

Big Memorial Day parades with marching bands—like the one that Chicago traditionally has—have been canceled.

And amid the grief caused by the deaths of more than 93,000 Americans from the deadly virus, the economic devastation accompanied by the loss of millions of jobs, and for some, the despair of home isolation, some might feel less inclined than normal to pause and remember those who sacrificed their lives in the defense of the country.

That would be unfortunate.

As we have been reminded of late of the bravery and selflessness of the medical professionals serving on the front lines of the COVID-19 crisis, it’s similarly appropriate once a year to stop and remember those who gave everything they had in the defense of the country.

That’s because Memorial Day is a day where we both celebrate their service and grieve for their loss.

Many were taken just on the cusp of adulthood, sometimes as young as 15, such as Pfc. Dan Bullock, who altered the date on his birth certificate to join the Marine Corps as a rifleman. He was killed in Vietnam in 1969 when a satchel charge was thrown into his bunker.

But sacrifice isn’t limited to the young. Army Maj. Gen. Harold “Harry” Greene was 55 years old when he was killed in Afghanistan in 2014. Greene always had a smile and a quip, followed by a hearty guffaw, to lighten the tense moods. Greene now lies in Section 60 in Arlington National Cemetery, surrounded by other such heroes.

They came from all walks of life—rich and poor, men and women, diverse religions and backgrounds—all united in a common goal; namely, to answer the call of the country. Certainly, none wished to die, but they believed in something greater than themselves, and uncommonly acted upon that belief.

Many military units make a special effort to remember the service members who died in their ranks. The 3rd Infantry Division (nicknamed “the Rock of the Marne”) at Fort Stewart, Georgia, for example, plants a crape myrtle in honor of every soldier who died while serving in the division since April 2003.

In a somber reminder of the price paid by that single division, 469 such trees have been planted.

President Ronald Reagan captured the motivation of these patriots when he said, “We’re blessed with the opportunity to stand for something—for liberty and freedom and fairness. And these are things worth fighting for, worth devoting our lives to.”

Even though the cemeteries might be closed and the parades canceled, ways remain to remember those brave men and women. Perhaps with a thought, a prayer, a toast, and if you have children, perhaps a conversation with them about what Memorial Day really means to us as Americans.