The ACLU Loses Its Way 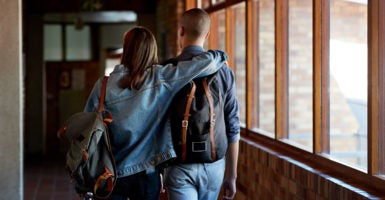 Title IX rules backed by the American Civil Liberties Union are so bad that in one case, after two college students got drunk and had sex, one rushed to report the other to the school because he was worried that she would report him first. (Photo: Klaus Vedfelt/Getty Images)

The American Civil Liberties Union used to be a great institution.

Founded in January 1920, the ACLU sought to become, in its own words, “the nation’s premier defender of the rights enshrined in the U.S. Constitution.” Over the decades, the organization fought for civil liberties even when no one else would.

The ACLU fought against the internment of Japanese Americans during World War II. It fought against racial segregation. And it fought for the free speech rights of students protesting the Vietnam War.

The ACLU’s commitment to the Constitution defied politics, and it defended even the most unpopular people if its unshakable principles demanded it.

For example, the American Civil Liberties Union defended the First Amendment rights of a Ku Klux Klan leader, a group of Nazis, and members of the notorious Westboro Baptist Church because of its “unwavering commitment to principle.”

Over its 100-year history, the ACLU has—to its credit—vexed both sides of the political aisle because it refused to compromise the principles of its “civil libertarianism.”

Sadly, that is no longer the case. In recent years, the group has retreated from its principles when they clash with trendy left-wing priorities.

By now, the ACLU’s retreat from the First Amendment is well documented. It will not defend the First Amendment rights of pro-life pregnancy centers or small religious businesses. It no longer defends religious freedom, although it once did. And in a leaked internal memo, the ACLU takes the position that free speech denigrating “marginalized groups” should not be defended.

Sadder yet, however, is the ACLU’s recent abandonment of the right to due process. For a group founded to help the powerless, this is a repudiation of its founding ideals.

Consider the new Title IX rules designed to restore the due process rights of those accused of sexual harassment on college campuses. The rules are meant to restore protections that were erased under the Obama regime.

Under the old rules (which remain in effect until August), colleges may expel students based on nothing more than the word of their accuser or even the word of a third party who witnessed nothing. The accused often is denied the right to cross examine, the right to counsel, the right to see the evidence against him or her, and the right to present exculpatory evidence.

It’s so bad that in one case, after two students got drunk and had sex, one of them rushed to report his sexual partner to the Title IX officer simply because he was worried that she would report him first.  Because he got there first, she was found guilty of sexual assault and suspended.

The new rules restore some due process protections. The American Civil Liberties Union should be happy. In fact, the ACLU ought to have been fighting for them.

After all, it was only two years ago that the ACLU opposed a victims’ rights bill because it would “undermin[e] a bedrock principle of our legal system—the presumption of innocence.”

Instead, the ACLU is suing to block the new rules. It claims that they “dramatically undermine students’ civil rights.”

The ACLU’s logic is as backward as are its priorities.

The organization says it is concerned that the new rules—in particular a requirement that victims report assaults to a Title IX official before an investigation may begin—would “inflict significant harm on students who experience sexual harassment or assault.”

The lawsuit does not clearly explain why that is so, but asserts that the new rules would interfere with students’ right to “equal educational opportunities,” especially for students of color, LGBTQ students, and other minority groups.

Never mind that under the old rules men of color are accused and suspended or expelled with alarming frequency.

There is no way for the ACLU to explain its decision to fight against due process, except that it has abandoned its principles to advance the trendy partisan agenda of the day.

If the American Civil Liberties Union means to become a litigation boutique for such causes, so be it. But it should be prepared to surrender the goodwill that its long and storied history of integrity has earned it.