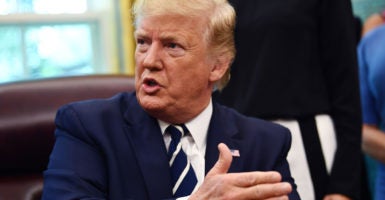 I’m sure you’ve heard about it in the news. President Donald Trump tweeted to Rep. Elijah Cummings, D-Md., calling him out for failing the city of Baltimore and focusing instead on the Mexican border.

This has caused quite an uproar, sending both politicians and the media alike sprinting to one side or the other.

Many people—including House Speaker Nancy Pelosi and Sen. Elizabeth Warren, D-Mass.—claim that Trump’s going after Cummings was an act of racism. That couldn’t be further from the truth.

Cummings, whose chairmanship of the House Oversight and Reform Committee has antagonized the president this year, has represented Maryland’s 7th Congressional District since 1996. The people of Baltimore first elected him to the seat over a quarter of a century ago.

Baltimore has been on the decline for just as long. The once-bustling port city has become almost unrecognizable, becoming one of the most crime-ridden cities in America.

The Washington Post, The New York Times, and other media outlets have noted Baltimore’s sky-high crime rates this year, calling it a “tragedy.” With over 2,000 violent crimes per 100,000 people in the year 2017, Maryland’s largest city is no stranger to deadly gun violence, domestic abuse, rape, and other horrific crimes.

Baltimore is now more dangerous than 99.2% of cities in the United States.

>>> Too Many American Blacks Live in Horrible Conditions

But crime is just the beginning. The city’s income tax is 3.2%, the maximum rate allowed by state law. Its schools offer poor education in even poorer facilities. The city has suffered the worst population decline of its entire history, and law enforcement is scrambling to find more police officers.

Cummings has fought back against Trump’s statements, promising that he is fighting for the people of Baltimore. Frankly, I don’t see it. If he really does want to effect positive change in this once-lively and industrious city, he needs to try harder.

The left has taken the appalling truth of what Baltimore has become and turned it into a race issue to deflect criticism from the president. The tragedy is that in doing so, it misses an opportunity to help citizens who deserve better than what they’ve been given.

These leaders are ignoring the poor job done by Baltimore’s leaders and are simply reinforcing their own agendas, when they should be putting their time and energy toward a city that needs all the help it can get.

>>> Why Black Kids Get Trapped in Failing Schools

Trump is doing his part. Unemployment rates among African-Americans are the lowest they’ve ever been—something not even Barack Obama achieved during his own presidency. In Obama’s first year alone, unemployment among African-Americans rose almost 4 percentage points. In Trump’s? It went down by over 1 point—and has continued to decrease ever since.

Our president is doing his job, despite what liberal politicians say. The inconvenient truth for Cummings and the left is that, according to objective data, Trump’s policies have improved opportunities and outcomes for black Americans—something that long-serving politicians like Cummings couldn’t do.

Perhaps Cummings and Baltimore’s elected leaders should take a hard look at the policies they’ve been pushing for so long.