Are COVID Survivors Immune From Getting It Again? What You Need to Know 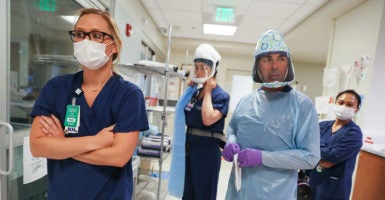 Clinicians gather near the room of a COVID-19 patient in the intensive care unit at Sharp Memorial Hospital amidst the coronavirus pandemic on May 6 in San Diego, California. Sharp HealthCare is the largest health system in San Diego County and is currently treating more than 120 COVID-19 patients at its four hospitals. (Photo: Mario Tama/Getty Images)

Now that we’ve gotten COVID-19 testing for active infections well under way across the country, many who have already been infected have understandably asked if they are now immune to reinfection.

This question applies both to those who had developed only mild/moderate symptoms, and those who had more serious/severe symptoms that may have required medical attention.

It will also be important for those who never developed symptoms but suspect they were exposed, because antibody testing will reveal if they were.

A new study indicates that SARS-CoV-2 may have been capable of human transmission and circulating in China as early as last October—which is earlier than the widely accepted December time frame.

We’ve identified the first case here in the United States as appearing in late January, but it’s possible the virus could’ve been around earlier, meaning many may have been exposed to the virus already.

Human immunity, not surprisingly, is complicated.

There are two important issues in determining immunity: testing for the presence of virus-neutralizing antibodies in a blood test and the testing of the concentration of those antibodies in the body.

Regarding the testing for the presence of antibodies, a recent New York City study shows that COVID-19 patients are producing antibodies, but it can take from a few to several weeks after infection for them to show up in serological tests.

Since this new virus has been a source of severe consternation for the medical and scientific communities—as it has been for everyone—this is important empirical evidence of a normal immune response and good initial news.

The other question is, in the absence of a vaccine, what level—or concentration—of antibodies is needed to prevent reinfection from SARS-CoV-2?

That question will be answered through serum neutralization research, but some promising studies suggest those who have resolved this particular coronavirus infection likely will have enough protection to ward off reinfection.

But for how long?

Immunity to a virus can wane over time. Protection after an infection could be short-term (months), or, like the common cold (which can be caused by a different coronavirus), it could last a year or at least a cold/flu season.

A defense could go on for longer if SARS-CoV-2 turns out like other coronaviruses such as severe acute respiratory syndrome and Middle East respiratory syndrome, for which virus-derived antibodies have reportedly given protection for two to three years.

Even if immunity to the SARS-CoV-2 virus reduces in effectiveness over time, the body’s immune system likely could generate a sufficient response to prevent a viral attempt at reinfection.

Beyond immunology, successful antibody testing also will help researchers develop historical and current information about the spread and penetrance of the virus, which will guide the continuing response to this pandemic.

Even more important will be the level of assurance it will provide to those who have developed immunity in possibly returning safely to normal activity. Testing front-line workers such as first responders will be a priority.

First responders are more often exposed to the virus, so the presence of protecting antibodies will defend them not only from contracting the disease, but also from spreading it to those they help.

At this time, while there are estimates, we still really don’t know how many Americans already have been exposed and may have immunity to reinfection.

There is still much to learn about this virus, but with antibody testing ramping up, the number of those immune will become increasingly in focus, aiding the development of good public health policies going forward and an economic recovery.