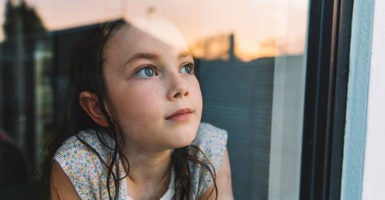 One of the biggest unknowns of the COVID-19 pandemic is how it affects children.

Thus, targeted mitigation efforts rightly would focus on nursing homes, which have suffered disproportionately from the COVID-19. Fixing policies that put older Americans at great risk likely will have the greatest effect on driving down national mortality, as opposed to blanket policies that include children.

However, just as we begin to think we have a handle on it, this virus continues to befuddle. A concerning link may exist between COVID-19 and a rare childhood autoimmune disorder called Kawasaki disease.

Out of 73 recent cases of Kawasaki disease in New York, three children have died and all three also tested positive for COVID-19. We don’t have evidence that this is necessarily a causal relationship, but some of the signs may make sense.

Kawasaki disease is an inflammatory autoimmune disorder of childhood that is thought to result from a previous viral infection. Some part of a virus, or the immune system’s response to it, causes the inflammatory pathway to hyperactivate suddenly and cause damage to the body.

A somewhat similar inflammatory phenomenon is known to occur with adults, and possibly is the main driver of mortality among COVID-19 patients. It stands to reason that Kawasaki disease, as an autoimmune disease of childhood often triggered by a previous viral infection, may be one of the effects of the coronavirus, also known as SARS-CoV-2.

But this is conjecture at this point. We simply don’t have sufficient data to draw any connection. The incidence of Kawasaki disease is estimated to be between nine to 19 cases per 100,000 children under age 5 per year.

And not all cases of Kawasaki disease occur in the context of a coronavirus infection.

For instance, in this report of 15 cases in New York, 10 tested positive either for an active or previous infection by SARS-CoV-2. This raises suspicion of the link, but with so few cases of Kawasaki disease, the correlation may be wholly spurious. After all, finding a case of COVID-19 in New York City would be entirely unremarkable.

The good news is that doctors have treated Kawasaki disease successfully for years with intravenous immunoglobulin. It is possible that Kawasaki disease may appear more severe lately because families have been reluctant to go to the emergency department for fear of COVID-19.

Families must seek treatment for Kawasaki disease, which is characterized by several days of a high fever, red and swollen eyes, rash, redness of the hands and feet, and inflammation of the lips and mouth.

Fear of the hospital has become a much larger problem for both the hospitals and their patients. But based on the data regarding children and SARS-CoV-2 transmission, it is likely safe for them and those around them to seek treatment.

Although children are not invulnerable to the coronavirus, they are less susceptible to severe disease.

A recent literature review of numerous pediatric studies found that children not only are much less likely to develop severe disease from the new coronavirus, but also unlikely to transmit the virus to others.

The review was conducted when there were 150,000 confirmed cases of COVID-19 in the United States. Of those, only 1.7% were children, more than half of whom were infants (62%) and nearly a quarter had underlying conditions (23%).

Among all confirmed pediatric cases of COVID-19, 5.7% required hospitalization. Of them, only 2% were admitted to an intensive care unit. This dataset included three confirmed deaths out of 2,572 cases.

Clearly, children neither are at great risk nor are they completely invincible to the effects of the virus. But statistically, nearly all confirmed COVID-19 cases among children were relatively benign.

Data showing less severe disease in children is easy to find, but data tracing disease transmission from children to adults is difficult to gather. However, one study of multiple pediatric research articles suggests that children are unlikely to be the primary source for infection in a household.

A similar dynamic exists in the school setting. An Australian study of 10 high schools and five primary schools from March to April found little transmission of the coronavirus from one person to the next. Twelve high school students and four members of the faculty were identified as confirmed cases of COVID-19 who had attended classes while infectious.

Nearly 600 other students were exposed to these COVID-19 cases but none of them tested positive. One student tested positive by antibody testing, which indicated a previous infection from which the student already had recovered.

The primary schools had a similar result, with one student and five faculty members identified as COVID-19 cases and only one student later found to be positive for antibodies.

Although more data is needed to draw a definitive conclusion about the role, if any, that children play in transmitting COVID-19, these findings all suggest that children are at the least risk themselves and pose the lowest risk to others.

Children seem to be mercifully spared the more severe manifestations of this pandemic. Not only do they seem less susceptible to infection, they seem not to spread the disease to others.

That being the case, it is likely that activities for children, such as school or summer camp, should be relatively safe to resume.

But as it has been throughout this ordeal, the new coronavirus easily can surprise us in the worst ways. It is likely we can safely allow our children to return to some semblance of normal life, but with caution and vigilance.