How Close Is US to Herd Immunity for COVID-19? What the Numbers Show 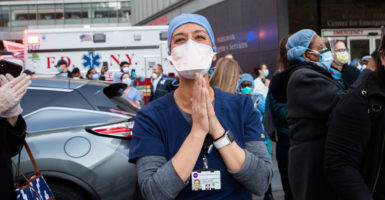 Relying on data from one survey, approximately 1.7 million people in New York City have had the coronavirus. Pictured: Medical workers stand outside NYU Langone Health hospital as people applaud to show their appreciation to medical staff and essential workers on April 21, 2020, in New York City. (Photo: Jeenah Moon/Getty Images)

There has been considerable interest lately in Sweden’s response to the COVID-19 pandemic.

Sweden pursued a much more relaxed mitigation strategy, practicing social distancing while avoiding a national lockdown, and approximately 20% of Swedes may have been infected and may now be immune to the virus.

Herd immunity is the point at which a large enough percentage of the population is immune to a disease that new cases are not likely to spread to others.

In other words, it’s when there are enough people who are immune to the disease that the disease has nowhere to go and eventually dies off. Therefore, every person who has been infected and recovered, or infected and remained asymptomatic, will help contribute to herd immunity.

But how close are we to achieving this? Although several studies are suggesting that there are far more people with antibodies to the virus than we know of, it’s not clear that we are very close.

An earlier study of pregnant women found that 29 out of 33 women who tested positive for SARS-CoV-2 were asymptomatic at the time of the test, and 26 of them never developed any symptoms at all. That finding suggests that for every pregnant woman with symptomatic COVID-19, there were seven who were infected with the virus, but never developed the disease.

That also suggests that for every woman with symptomatic COVID-19, there may be up to four other women who were infected, but don’t show symptoms.

The study is difficult to generalize because the sample was small and because the study took place in New York City, where incidences are expected to be very high. Furthermore, women seem to be less susceptible to the COVID-19 disease, which would cause the numbers to overestimate the asymptomatic prevalence of SARS-CoV-2.

To get a better idea, the state of New York has been conducting antibody tests and announced preliminary results on April 23, which found that 13.9% of New York residents had the virus and recovered.

In New York City, that rate was up to 21.2%. In upstate New York, away from the metropolitan centers, the rate was much lower at 3.6%.

If that’s the case, there would be approximately nine asymptomatic infections for every symptomatic case of COVID-19. Granted, those are suppositions based on preliminary data that hasn’t been released in its entirety.

In one of the first complete antibody studies on prevalence, researchers from the Stanford University School of Medicine tested a representative sample of 3,330 people in Santa Clara County, California.

When adjusted by demographics to represent the county, it found that the estimated prevalence of the virus ranged from 2.49% to 4.16%, which would represent between 48,000 and 81,000 people.

If those estimates prove true, the actual prevalence in Santa Clara County would be 50 to 85 times greater than the number of confirmed cases.

However, some have raised issues with this study. The raw, unadjusted prevalence found in the study was 1.5%, representing 50 people testing positive for the antibody out of 3,330 study participants.

Still, the study of Santa Clara County echoes the studies from New York that suggest that actual prevalence of SARS-CoV-2 is likely much higher than the number of confirmed cases would lead us to believe (albeit likely not 50 to 85 times higher).

While Sweden’s 20% immunity corresponds to New York City’s estimated 21.2% immunity, the same is not true for the rest of the country.

There are nearly 1 million cases in the United States at this time, so even with the greatest estimated prevalence from the Santa Clara County study, there would be 85 million actual cases, each of which would result in a person being immune to the virus.

The obvious problem is that there are approximately 245 million Americans left to be infected.

Given that the Santa Clara County numbers are likely overstated even for the COVID-19 hot spot of Santa Clara, the actual number of Americans left to be infected is many tens of millions more than that.

Herd immunity is an unrealistic goal for the United States until there is a vaccine. Even if the virus proves to spread much faster than previously thought, that would only require a much larger proportion of Americans to get infected and develop immunity.

That’s not to say that we should hunker down until a vaccine comes, but rather that we should proceed with the assumption that we will not have herd immunity. That will require careful planning and deliberate steps, but it’s certainly possible.