Coronavirus Authoritarianism Is Getting Out of Hand 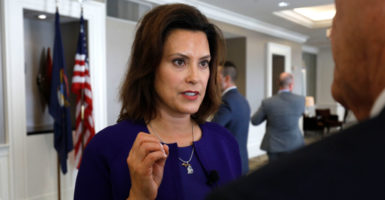 Under what imperious conception of governance does Michigan Gov. Gretchen Whitmer believe it is within her power to unilaterally ban garden stores from selling fruit or vegetable plants and seeds? Pictured: Whitmer speaks with a reporter after a Democrat Unity Rally Aug. 7, 2018, in Detroit, Michigan. (Photo: Bill Pugliano/Getty Images)

It’s reasonable to assume that the vast majority of Americans process news and data, and calculate that self-quarantining, wearing masks, and social distancing make sense for themselves, their families, and the country.

Free people act out of self-preservation, but they shouldn’t be coerced to act through the authoritarian whims of the state. Yet this is exactly what’s happening.

There has been lots of pounding of keyboards over the power grabs of authoritarians in Central and Eastern Europe, and rightly so.

Yet right here, politicians act as though a health crisis gives them license to lord over the most private activities of the American people in ways that are wholly inconsistent with the spirit and letter of the Constitution.

I’m not even talking about national political and media elites who, after fueling years of hysteria over the coming Republican dictatorship, now demand Donald Trump dominate state actions. I’m talking about local governments.

Under what imperious conception of governance does Michigan Gov. Gretchen Whitmer believe it is within her power to unilaterally ban garden stores from selling fruit or vegetable plants and seeds?

What business is it of Vermont or Howard County, Indiana, to dictate that Walmart, Costco, or Target stop selling “nonessential” items, such as electronics or clothing?

Vermont has 628 cases of the coronavirus as of this writing. Is that the magic number authorizing the governor to ban people from buying seeds for their gardens?

Maybe a family needs new pajamas for their young kids because they’re stuck in a new town. Or maybe Mom needs a remote hard drive to help her work remotely. Or maybe Dad just likes apples. Whatever the case, it’s absolutely none of your mayor’s business.

It makes sense for places like Washington, D.C.; Virginia; and Maryland to ban large, avoidable gatherings. But it is an astonishing abuse of power to issue stay-at-home orders, enforced by criminal law, empowering police to harass and fine individuals for nothing more than taking a walk.

The criminalization of movement ends with 10 Philly cops dragging a passenger off a bus for not wearing a face mask.

It ends with local Brighton, Colorado, cops handcuffing a father in front of his family for playing softball with his daughter in an empty park.

It ends with three Massachusetts men being arrested, and facing the possibility of 90 days in jail, for crossing state lines and golfing—a sport built for social distancing—in Rhode Island.

There is no reason to close “public” parks, where Americans can maintain social distance while getting some air or space for their mental and physical well-being—or maybe see a grandchild from afar.

In California, surfers, who stay far away from each other, are banned from going in the water. Elsewhere, hikers are banned from roaming the millions of acres in national parks.

Millions of lower-income and urban-dwelling Americans don’t have the luxury of backyards, and there is absolutely no reason to inhibit their movement, either.

It’s one thing if people are purposely and openly undermining public health. The constitutional right to assemble peacefully and protest or practice your religion, however, is not inoperable in the presence of a viral pandemic.

Would-be petty tyrants, such as Dallas County Judge Clay Jenkins—who implores residences to rat out neighbors who sell cigarettes for “putting profits over public health”—forget that we are not ruled by him, and that he is merely our temporary servant.

But it’s important and necessary, say the experts. Great. Convince us. Most polls show that 80-something percent of Americans will stay home for the rest of this month even if lockdowns are lifted.

The question of how many lives would be lost if we didn’t shut down the economy is a vital one, but it is not the only one. There is an array of factors that goes into these decisions. One of them should be preserving our laws and our freedom in times of crisis.

We aren’t at “war.” There are no coronavirus spies and no coronavirus sabotage. Affixing “war” to societal problems—the “war on drugs” being the most obvious example—is typically a justification for expanding state power.

Also, authoritarianism isn’t defined as “strict obedience to authority at the expense of personal freedom except when there is a pandemic.”

Your declarative sentences and forceful feelings do not transform the meaning of either authoritarianism or freedom—though if we dump our principles every time there’s a crisis, they might as well.