The Results Are In: Stay-at-Home Orders Are Curbing Spread of COVID-19 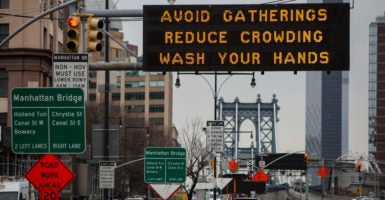 A sign warns residents to take steps to contol the outbreak of COVID-19 at the entrance to the Manhattan Bridge in Brooklyn on March 19 in New York City. (Photo: Victor J. Blue/Getty Images)

Strict stay-at-home orders imposed to inhibit the spread of COVID-19 have dramatically altered daily life and placed a tremendous burden on the economy.

Americans are understandably frustrated by these restrictive measures, but the two states hardest hit by the virus show that these measures are working.

No, they’re not out of the woods yet, but New York and Washington are making progress.

As of this writing, New York state has nearly 160,000 COVID-19 cases. The disease has been particularly harsh for New York City because of its heavy international traffic, reliance on public transit, and extreme population density.

Gov. Andrew Cuomo’s “New York State on PAUSE” order took effect on March 22, just over two weeks ago. Eleven days later, the number of daily deaths attributed to the disease decreased, leading Cuomo to express hope that the disease may be reaching its apex.

It was too soon for the “quarantine” to have taken full effect, however.

Dr. Anthony Fauci, the top immunologist on the president’s coronavirus task force, contends that any realized progress “is a reflection of what happened two and a half weeks ago.”

Unsurprisingly, then, the number of deaths in the Empire State has risen again this week. But experts predict the epidemic in New York will soon plateau.

For example, New York now projects that demand for new hospital beds will reach an inflection point in a matter of days, not weeks, as predicted earlier. Once that point is reached, New York will require fewer new beds each day until early May, when it expects to be discharging more COVID-19 patients than it takes in.

Washington was the first state to be hit hard by the virus. On Jan. 20, a man traveling to Seattle from Wuhan tested positive for COVID-19. But at that time, the World Health Organization was still reporting that there was no human-to-human transmission of the disease. The state therefore felt no need to prepare for a pandemic—nor did it have time to do so.

As a result, Washington was the country’s No. 1 hot spot for COVID-19 cases from January until March 15, at which point it was surpassed by New York. Since then, Washington has continued to drop relative to other states and currently ranks 10th in number of cases, likely owing to early and aggressive actions by the governor.

On Feb. 29, Washington Gov. Jay Inslee declared a state of emergency to better mobilize resources against the virus. He then enacted a series of containment measures, closing schools on March 12, shutting bars and restaurants on March 16, and barring visitors to long-term care facilities on March 17. These steps culminated with a stay-at-home order on March 23.

The Institute for Health Metrics and Evaluations now projects that demand for hospital resources in Washington peaked April 2. Confident in the trajectory of the disease, Inslee has decided to return 400 ventilators that the state had received from federal stockpiles so they can be redirected to New York or other states that may have greater need.

Containment measures require the cooperation of the public. In Washington state, the people understood the gravity of the situation and did their part. President Donald Trump recognized this Saturday, saying at a press briefing:

Many governors initially made large requests for federal support for their states in anticipation of a greater number of cases, but the residents of Washington state have done a really good job of following the federal distancing guidelines. They really have.

Although Washington state has made great progress in the fight against COVID-19, it will take more time to solidify those gains. Inslee has extended the stay-at-home order until May 4. This is prudent; people are still coming down with the virus, although the growth in cases is beginning to stabilize.

The economic cost of stay-at-home orders has been great. But New York and Washington, the two initial sites of outbreak in America, now show signs of progress, indicating that aggressive actions are having their desired effect.

The invisible enemy attacking America has spared no state or region. But it is important to remember that there will be an end to this. The tide appears to be turning in these bellwether states, suggesting that the end may be near.