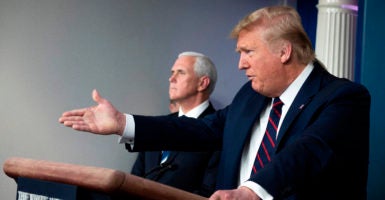 President Donald Trump is applying the Defense Production Act to require General Motors to manufacture more ventilators to respond to the coronavirus pandemic.

“Ventilators are a big deal,” the president said at the Friday press briefing.

“This invocation of the DPA should indicate to all that we will not hesitate to use the full authority of the federal government to combat this crisis,” Trump said. “We thought we had a deal with, as an example, General Motors. I guess they thought otherwise. They didn’t agree and now they do agree.”

The president also announced he was naming his trade adviser Peter Navarro as the policy coordinator on Defense Production Act. He will continue to serve in his post as assistant to the president and director of trade and manufacturing policy.

Trump had resisted using the full power of the law that allows the federal government to direct companies to manufacture. However, he said, Friday, “We’ll work with the private sector but we will do what we have to do.”

The president said regarding GM that he thought there was a deal to build 40,000 ventilators. But GM wanted to build fewer.

“Price became a big object, but Peter Navaro is going to handle that and Peter will do a very good job. We’ll see. Maybe they will change their tune,” Trump said. “We didn’t want to play games with them.”

Trump said that GM was wasting time in the midst of a crisis.

In a statement, GM said that it has already been working with medical device supplier Ventec Life Systems.

Ventec, GM and our supply base have been working around the clock for weeks to meet this urgent need.  Our commitment to build Ventec’s high-quality critical care ventilator, VOCSN, has never wavered.

The partnership between Ventec and GM combines global expertise in manufacturing quality and a joint commitment to safety to give medical professionals and patients access to life-saving technology as rapidly as possible. The entire GM team is proud to support this initiative.