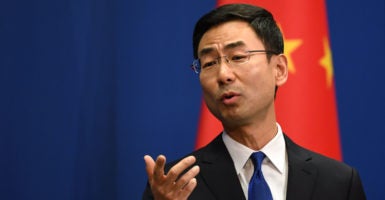 For quite some time, China has been trying to undercut the foundation of American global power. Unlike Moscow’s often coarse, brutish efforts, Beijing has been stealthier than an F-35, using public diplomacy initiatives to subtly buy its way into schools, civil society, and the private sector.

More specifically: Why are Chinese government officials now publicly denying that the coronavirus started in Hubei province and citing conspiracy websites that claim the U.S. is responsible for the virus?

Recently, Lin Songtian, the Chinese ambassador to South Africa made both those claims.

Lin is no loose cannon. He does, however, know Africa well. Apparently he has judged that Africa will be receptive to more aggressive propaganda efforts.

Lin’s conspiracy charge may well get traction in Africa, where there lingers a deep distrust of CIA activities from the Cold War. The old Soviet disinformation campaign claiming that the CIA created AIDS took root in the continent and remains to this day.

Moreover, the Chinese have been peppering Africa with anti-American messages for years now–all part of its aggressive program to penetrate and dominate the African media market.

But the new stridency of China’s anti-American propaganda is not limited to just Africa or just COVID-19. Recently, Chinese state media attacked the U.S. Millennium Challenge Cooperation investment in Sri Lanka, accusing America of using the development program as a “Trojan Horse” with a “hidden agenda.”

So what is up with Beijing?

The regime is reeling from a terrible string of failures and misjudgments. Developing nations are wising up to the “debt traps” set by China’s global Belt and Road initiative. Many countries–especially those in Asia–are outraged by China’s response to the protests in Hong Kong and its meddling in the Taiwan elections. Then came the coronavirus and Beijing’s abysmal response, which sparked a global pandemic.

To say that Beijing’s brand has been tarnished would grossly understate the case. So picking on the U.S. could be only a desperate attempt to divert attention away from its manifest failures.

More likely, though, it’s just of a matter of the COVID-19 charge being so preposterous as to draw our attention to the type of propaganda that’s been out there–but largely ignored by the U.S.–for quite some time.

China has been running a smear campaign to undermine U.S. influence in Africa and South Asia for years. Thanks to the World Wide Web, we are able to see more of it.

In addition, China has long relied on the president’s critics in the U.S. to pick up messaging critical of the White House and push it through the domestic anti-Trump megaphone.

For example, when U.S. officials started referring to COVID-19 as the “Wuhan Virus,” (a name earlier propagated by the media), the regime in Beijing objected that the term was somehow “racist.” Some on the American left–including members of the media who had used the term themselves–quickly picked up and repeated the accusation.

Finally, there is no question that China is responding to what is no longer a one-sided propaganda war. This administration has been anything but quiet in its criticism of Beijing. Secretary of State Mike Pompeo, for example, has consistently called out “the Communist Chinese Party,” not “China,” as being the source of troubles from Beijing.

So far, the administration has kept its multipronged dealings with China on separate tracks. Thus, the U.S. tries to negotiate trade deals with Beijing even as it moves to counter China’s growing military power and the global war of words heats up. Maintaining that sense of balance and discipline in the competition is key to protecting U.S. interests and keeping the competition from spinning out of control.

The bottom line is, regardless of how the current outbreak of COVID-19 plays out, the great power competition between the U.S. and China will continue for some time.

The global pandemic triggered by Beijing’s inept response has produced one positive side effect, however. It has sharpened our recognition that China’s public diplomacy masks the malign anti-Americanism of an increasingly powerful competitor on the global stage.