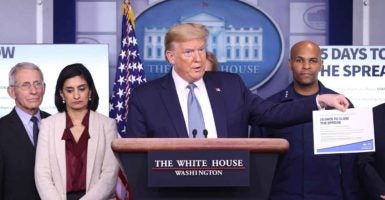 President Donald Trump, flanked by members of the coronavirus task force, speaks to reporters Monday in the press briefing room at the White House. The U.S. has more than 3,000 confirmed cases of COVID-19, with 69 deaths. (Photo: Win McNamee/Getty Images)

President Donald Trump said Monday that concerted diligence on the part of every American is necessary to stop the spread of the coronavirus.

“With several weeks of focused action, we can turn the corner and turn it quickly,” Trump said during a press conference at the White House.

The president recommended that Americans not take part in gatherings of more than 10 and avoid bars, restaurants, and travel.

He indicated that the pandemic created by the new coronavirus disease, or COVID-19, could continue into the summer.

“People are talking about July, August, something like that,” Trump said. “So it could be right in that period of time where I say it washes through.”

Saying that Americans are “very scared,” Trump went on to highlight the work being done by government officials and lawmakers across the country.

“I think they see that we’re doing a very professional job,” he said. “We’ve been working with the governors and frankly, the mayors, local government at every level.”

We have FEMA [Federal Emergency Management Agency] totally involved. FEMA’s been—you know, usually we see FEMA for the hurricanes and the tornadoes—now we have FEMA involved in this. They’ve been doing a fantastic job locally, working with people that they know … like, as an example, in California, in the state of Washington. They work with them a lot on other things, and they’re very familiar.

Trump also addressed the stock market. The market’s turmoil continued Monday, with the Dow Jones Industrial Average down by almost 3,000 points, leading to the Dow’s “suffering its worst day since the ‘Black Monday’ market crash in 1987 and its third-worst day ever,” CNBC reported.

Trump emphasized his faith in the White House coronavirus task force, including its head, Vice President Mike Pence, and expert members such as U.S. Surgeon General Jerome Adams and Dr. Deborah Birx, who is coordinator of U.S. government activities to combat HIV/AIDS and the nation’s special representative for global health diplomacy.

“We have the best people in the world,” Trump said. “We have really the greatest experts in the world. And someday soon, hopefully, it’ll end and we’ll be back to where it was.”