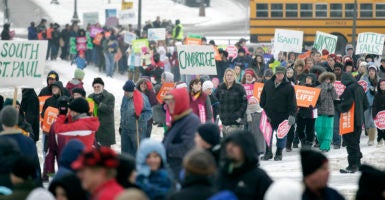 The City Council in St. Paul, Minnesota, has voted unanimously to designate March 10 as “Abortion Providers Appreciation Day.” The mayor of adjoining Minneapolis proclaimed the same.

The City Council’s resolution commemorates the death of Dr. David Gunn, who was shot and killed by a protester outside his Florida abortion clinic on March 10, 1993.

To honor his memory, March 10 has since been established as a day to show appreciation for the high-quality care that abortion providers and clinic staff provide, and to celebrate their courage, compassion, and dedication to their work.

The Supreme Court of the United States now contains a majority of justices who may not interpret the Constitution to provide protection for the right to end a pregnancy and may overturn or severely limit Roe v. Wade, which includes the threat of patients and abortion providers being arrested and sent to jail.

The observances in St. Paul and Minneapolis are part of a national celebration of abortion providers promoted by Planned Parenthood and other pro-choice activists every March 10 since 1996. On social media, the sentiment is tagged as #CelebrateAbortionProviders.

The St. Paul City Council, made up of seven Democrats, adopted the resolution March 4 during a session that garnered no discussion from council members.

In an email to The Daily Signal, spokesman Paul Stark wrote:

In the other part of the Twin Cities region, Minneapolis Mayor Jacob Frey, a Democrat, on Tuesday morning also declared it a day to celebrate abortion providers, specifically those operating in his city.

“Every day, abortion providers like Whole Woman’s Health deliver high quality care in the face of harassment and threats to abortion access at the federal and local levels,” Frey said, CBS 4 Minnesota reported.

“I’m proud to recognize today as Abortion Provider Appreciation Day to celebrate Whole Woman’s Health as an essential part of our community,” the mayor said.