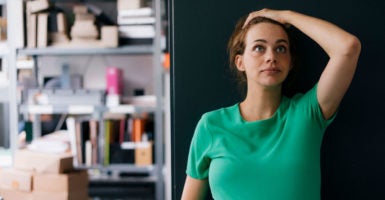 The nine justices will hear oral argument Wednesday in a case involving Louisiana’s law requiring doctors who perform abortions to have admitting privileges at a nearby hospital. (Photo: Westend61/Getty Images)

Naila Meese is part of the Young Leaders Program at The Heritage Foundation.

The Supreme Court will hear cases this week involving hospital admitting privileges for abortion doctors and a separation-of-powers question at the nation’s consumer protection agency.

The high court returned from its winter break in late February after a monthlong hiatus. Earlier this term, the nine justices heard arguments in cases involving the Second Amendment, school choice, and the Obama-era DACA program, to name a few.

Cases still to come this term involve the House of Representatives’ attempt to subpoena President Donald Trump’s financial records, states’ punishment of “faithless electors” in the Electoral College, and the Little Sisters of the Poor, an order of Catholic nuns who are still seeking relief from Obamacare’s contraceptive mandate.

Here, though, are two cases to watch this week.

The Supreme Court will hear oral argument Tuesday in a major separation-of-powers dispute.

In 2010, Congress created the Consumer Financial Protection Bureau to implement and enforce federal laws concerning consumer financial products and services. A single director appointed by the president, with the advice and consent of the Senate, was to head up the new “independent” agency, often called the CFPB.

Congress specified that the director of the consumer agency would serve a five-year term and could be removed from office by the president only for “inefficiency, neglect of duty, or malfeasance in office.”

The Supreme Court held nearly a century ago in Myers v. United States that Article II of the Constitution gives the president the exclusive power to remove subordinate executive branch officers.

Chief Justice William Howard Taft–a former president himself—explained that the president’s “selection of administrative officers is essential to the execution of the laws by him, [and] so must be his power of removing those for whom he cannot continue to be responsible.”

Then, in Humphrey’s Executor v. United States (1935), the high court carved out a narrow exception to this rule for the Federal Trade Commission, a quasi-legislative, quasi-judicial body headed up by multiple commissioners.

The court generally has declined to extend this limit on the president’s removal authority to new areas, most recently in Free Enterprise Fund v. Public Company Accounting Oversight Board (2010).

Seila Law refused to comply on the ground that the consumer agency’s structure is unconstitutional. A federal district court granted the agency’s petition to order Seila Law to comply with the demand.

On appeal, the U.S. Court of Appeals for the 9th Circuit upheld the constitutionality of the consumer agency’s structure, citing the case of Humphrey’s Executor.

At the Supreme Court, Seila Law maintains that the Consumer Financial Protection Bureau’s structure is a “historical anomaly,” pointing out that it is one of only four agencies (all “of recent vintage and widely questioned legitimacy”) run by a single director insulated from removal by the president.

The Trump administration agrees with Seila Law that the consumer agency’s structure violates the Constitution and encourages the court to overrule the Humphrey’s Executor decision if the justices believe that is necessary.

Since the administration is not defending the agency’s structure, the court appointed former U.S. Solicitor General Paul Clement to do so. He argues that the Constitution does not have a “removal clause” squarely placing that responsibility with the president.

The U.S. House of Representatives also filed a brief (and will appear at the oral argument) suggesting that the court should avoid wading into the constitutional issue presented, and instead resolve the case on narrower grounds.

The House argues that whether or not the consumer agency’s director enjoys removal protections will not affect the underlying action to enforce the civil investigation demand against Seila Law.

On Wednesday, the justices will hear oral argument in a case involving Louisiana’s law requiring doctors who perform abortions to have admitting privileges at a nearby hospital.

In Whole Woman’s Health v. Hellerstedt in 2016, the Supreme Court heard a similar case regarding a Texas law that required physicians performing abortions to have admitting privileges at a hospital within 30 miles. Admitting privileges enable doctors to accompany their patients to the hospital and treat them there.

In a decision that turned on how the law operated on the ground in Texas, the high court held that the law constituted “an undue burden on women’s access to abortion.” The court did not rule that admitting privileges are per se unconstitutional.

The case of June Medical Services involves a similar law, but the facts supporting Louisiana’s law are different. The state Legislature passed the admitting privileges legislation in part as a quality control measure. The state’s Health Department had documented a history of abortion clinics that hired doctors who were unqualified and provided substandard care to patients.

For example, one clinic hired a radiologist and an ophthalmologist and trained them to perform abortions. The Health Department reported detailed instances of women requiring emergency surgery at hospitals after experiencing complications during or following an abortion.

Abortion providers sued to enjoin the law. The U.S. Court of Appeals for the 5th Circuit upheld Louisiana’s law, finding that the requirement of admitting privileges “does not impose a substantial burden on a large fraction of women” seeking abortions, because most doctors would be able to obtain admitting privileges.

At the Supreme Court, the abortion providers argue that the justices should invalidate Louisiana’s law because it is “materially indistinguishable” from the one struck down in Whole Woman’s Health. They maintain that the law doesn’t confer any benefits on women.

Louisiana contends that its law doesn’t impose an undue burden or substantial obstacle on access to abortion. It also argues that abortion doctors don’t have standing to challenge the law on behalf of women.

Litigants must demonstrate “standing” to bring a legal challenge based on actual injuries that they have suffered or will suffer as a result of the defendant’s conduct.

As a general matter, courts will not hear lawsuits asserting the legal rights of a third party unless there is (1) a close relationship between the litigant and the third party with the underlying right and (2) a hindrance or genuine obstacle preventing the third party from asserting her own rights.

In Singleton v. Wulff (1976), the Supreme Court first allowed abortion doctors to assert the rights of women, despite the fact that women previously had brought their own legal challenges. The “Jane Roe” in Roe v. Wade, for example, was a pregnant woman.

Since Singleton, fewer women have brought their own challenges and, today, abortion clinics and doctors bring the vast majority of lawsuits.

This is particularly troublesome in situations such as June Medical Services, where the challenged law was designed to protect women from the life-threatening incompetence of the very doctors who are trying to invalidate the law.

Seila Law v. CFPB and June Medical Services v. Russo are just two of many important cases at the Supreme Court this term. Look for decisions in these cases and others by the end of June.