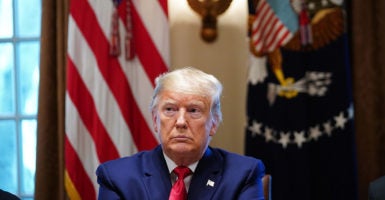 President Donald Trump meets with members of the coronavirus take force and pharmaceutical executives in the Cabinet Room of the White House in Washington, D.C., March 2, 2020. (Photo: Mandel Ngan/AFP/Getty Images)

It’s rare that President Donald Trump ever seems to misread a communications matter. From the earliest 2016 debates, it became clear that he is a lot better at communicating with the American people than your standard-issue Republican politician. He’s also a master at the media game.

The liberal press would never admit it, but he’s the best political communicator of our time. That’s why his treatment of the new coronavirus is so surprising.

Trump has been his usual confident self when it comes to coronavirus. His primary talking points have been twofold: The federal government is doing an amazing job, and the virus may not be as dangerous as people think.

The president’s confidence is usually a strength. People want that in a leader. But with coronavirus, there are a couple of problems with Trump’s messaging.

First, it’s a disease that we can only control marginally. We can take steps to minimize the impact, speed up vaccine research, and prepare our health care system, but we can’t fundamentally control the disease, and we don’t really know how it will turn out. We can’t control things like how the disease reacts to warmer weather or how it evolves.

Reassurance is good, but sending a message that everything is going to be fine is dangerous when you don’t have all the facts.

Second, our government is horrible at large-scale operations for catastrophic scenarios.

We have already seen federal government failures on coronavirus. The Centers for Disease Control and Prevention spent a lot of time developing a coronavirus test kit that did not work properly.

The State Department, over objections from the CDC, flew 14 cruise ship passengers infected with coronavirus back to the U.S. on a plane with uninfected passengers on board.

There have been complaints that the Department of Health and Human Services sent employees to meet infected patients returning to the U.S. from China without proper protective equipment or training.

In response to some of these early problems, Trump has appointed Vice President Mike Pence to oversee our coronavirus response. This should help, but it also adds further political danger for the president. If the response suffers from further problems, the problems are now sitting right in the vice president’s office.

Generally, operations such as these are handled at Cabinet agencies, which have the manpower and expertise to adequately address the problem. The vice president and his tiny staff can be easily overwhelmed by the needs of this effort. And if there are management problems, it would be tough politically for Trump to swap out his own vice president as the leader of the effort.

If the coronavirus hits our shores on a limited basis and blows over without too much damage to our livelihood or our economy, everything will be fine. The president will look like a genius. If it doesn’t, or if we witness major inadequacies—real or perceived—in the federal government’s response, the president may have a big political problem.

If this crisis proves serious, will our polarized country manage to come together over a large-scale disaster? Sadly, this does not seem likely based on what we’ve seen so far. The president’s political opponents and their allies in the press are geared up to blame him for anything and everything they can.

At a recent political rally, Trump described his opponents’ efforts to politically smear him for coronavirus as just the latest in a series of political hoaxes attempted against him. In a sign of how polarized we have become, some Democrats and some in the press accused the president of saying the virus itself was a hoax.

Any fair reading of Trump’s comments shows this is preposterous. And the president’s actions to date—travel restrictions, quarantines, emergency spending requests, and the appointment of his own vice president to lead the response—establish how seriously he’s treating the virus. The scuffle over his words, however, proves just how potentially perilous this issue is for the president.

Given the situation, the best course for the president is to show the American people he is treating the coronavirus with the utmost seriousness and managing our massive government to minimize the scope of the outbreak. But telling Americans that our government is performing amazingly well and everything will be fine seems reckless.