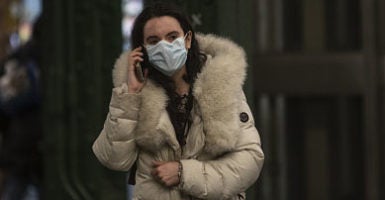 A commuter wearing a mask to guard against the coronavirus talks on a mobile device Monday while walking through a subway station in New York. (Photo: Victor J. Blue/Bloomberg/Getty Images)

President Donald Trump announced Monday evening that he will push Congress for a payroll tax cut to stem concerns about the coronavirus that sent the stock market into a spiral earlier in the day.

Trump also pledged he would push for hourly wage earners to be able to take off work without fear of losing their jobs, as the number of related U.S. deaths rose to 26, all but four in Washington state.

The president said he would give more details Tuesday after meeting with members of Congress.

“We are going to be seeing the Senate and meeting with House Republicans and discussing possible payroll tax relief,” Trump said at the White House, flanked by members of the administration’s coronavirus task force headed by Vice President Mike Pence.

“We are also going to be talking about hourly wage earners getting help so that they can be in a position where they are not going to miss a paycheck,” Trump said. “We are going to be working with small companies, large companies, so that they don’t get penalized for something that’s not their fault.”

The number of confirmed cases in the U.S. jumped to 600, spanning 30 states and the District of Columbia. California and Florida each confirmed two deaths, USA Today reported.

Around the world, the coronavirus has infected more than 108,000, killing more than 3,800, CNN reported.

Trump said his administration is handling the health crisis “very well,” noting travel restrictions he said never were imposed before.

“We’ve never done that in our country before. We could have had a situation a lot more dire,” the president said.

Trump said the administration would work with the airline, cruise ship, and hotel industries, which are being hit hard by the spread of the disease.

Pence, speaking after Trump had left the briefing, said that nether he nor the president had been tested for the virus.

Administration officials sought to confront the coronavirus on both the economic and public health fronts.

“President Trump has delivered a historically strong economy,” Health and Human Services Secretary Alex Azar told reporters earlier Monday at the White House. “The fundamentals of this economy are unbelievable, whether it’s employment, or wage growth, or productivity, or international trade deals. The fundamentals remain what they are.”

The Dow Jones Industrial Average closed Monday with a decline of 2,000 points, a fall that also came during a shake-up in the oil industry that added to market woes.

The World Health Organization said the spread of the virus is close to a pandemic, citing escalating cases in China and Italy.

In the U.S., the Centers for Disease Control and Prevention is spearheading research for a vaccine as well as public information efforts.

Trump administration officials were readying to present options for policy changes to respond to the economic disruption and public health fears caused by the new coronavirus disease, which health officials call COVID-19.

After Azar’s remarks outside the White House, HHS announced a diagnostic test for coronavirus designed for use in a system that can process up to 1,000 tests in 24 hours. The test will get financial support from HHS.

The molecular diagnostic test from Hologic Inc. will be the first product to combat COVID-19 selected for development through the department’s Biomedical Advanced Research and Development Authority. The HHS division is contributing $699,000 in federal tax dollars to accelerate Hologic’s development.

“President Trump is leading a whole-of-government response, with the vice president helping him on the public health issues we are facing on the novel coronavirus,” Azar said. “That is his No. 1 concern.”

Congress last week approved a $8.3 billion emergency spending package for coronavirus. However, House Democrats are pushing for another bill to mandate paid leave as a response to the disease, something party leaders advocated before the virus surfaced.

Ideas to prevent panic include deferring taxes for certain industries hit by coronavirus, including the hospitality and travel industries, and directing federal funds to specific areas of the country that are most affected, The Washington Post reported.

The Treasury Department and the National Economic Council have worked on the proposals for the past 10 days, the Post reported.

“In terms of the economy, he and his economic team have the tools to keep this economy going strong,” Azar said of the president. “They delivered that historic fundamentals. They’ve got tools to deal with that.”

“But the public health and protecting the American people is the No. 1 priority for all of us,” he said.

Ken McIntyre contributed to this report, which was updated to include the president’s remarks.