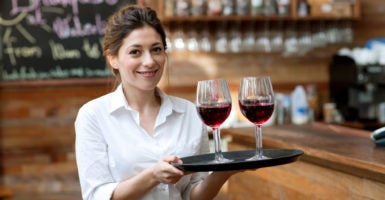 New jobs in food service and at drinking establishments led the way in February as the economy added 273,000 jobs. (Photo: Nick David/Getty Images)

In the face of uncertainty because of the coronavirus, the Bureau of Labor Statistics shattered expert predictions Friday, reporting that the economy added 273,000 jobs in February.

The unemployment rate is back to the lowest rate since 1969, and Americans continue to see more money in their paychecks.

This jobs report helps demonstrate that the economy has a firm foundation, and will be helpful in weathering whatever impact we see in the future because of coronavirus.

Since December, the economy has averaged 243,000 new jobs per month. The nation has surpassed 100,000 jobs in 36 out of the past 39 months and saw positive job growth for a record-setting 113 months.

The unemployment rate dipped last month from 3.6% to 3.5%. The labor force participation rate was essentially unchanged at 63.4%, with a slight loss of 60,000 people to the civilian labor force.

This loss also could explain why the unemployment rate fell. In spite of this, labor force participation has not been this high since June 2013, and continues to be the high point for the Trump administration.

One sign of a healthy job market is rising wages, and wages continued to rise in February. The report shows that average hourly earnings for private, nonfarm payroll employees increased by 9 cents to $28.52, representing a healthy 3% increase over the last year.

Many suggest this jobs report is just a calm before a storm of bad economic news because of the spreading coronavirus. Is this true? We don’t know.

In an interconnected global economy—a feature of the 21st century that has greatly expanded prosperity—economic impacts will be felt here at home regardless of the health impact of the virus.

But here’s what we do know: The U.S. economy is on relatively solid footing compared to the rest of the world. We have a strong job market, productivity is up, and small business owners are backing up their confidence with increased hiring.

But most of all, we know what works.

It is clear that since President Donald Trump took office and began hacking away at the big government policies implemented over the last decade, the economy has stepped on the gas and not the brakes.

We don’t know what coronavirus will mean for next month’s jobs report, or the next number for gross domestic product. But we will recover well if we continue to stick with what works (less government regulation, less government spending, lower taxes) and avoid what doesn’t work (tariffs, government intervention, out-of-control spending).

We will have a much easier time getting through the uncertainty when we do everything we can to avoid the things that cause it. Let’s stick to what we know works, and avoid what doesn’t.