Matt Schlapp Wants You to Love America: ‘Feel Pride in What You’re Doing’ 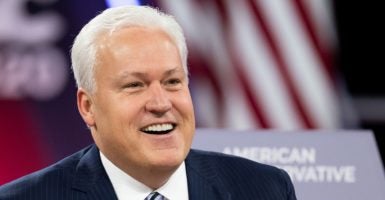 The Conservative Political Action Conference is the nation’s largest annual gathering of conservative activists, attracting thousands of people to the event, which takes place just outside of Washington, D.C., every year.

Matt Schlapp, chairman of the American Conservative Union, which hosts CPAC, joins The Daily Signal Podcast to talk about the impact of this year’s gathering. He also explains why it went with the “America vs. Socialism” theme this year and how CPAC plans to expand in the future.

Listen to today’s podcast episode or read the lightly edited transcript below.

Rob Bluey: We are joined at The Daily Signal by Matt Schlapp. He’s the chairman of the American Conservative Union, which hosts this great event, CPAC [the Conservative Political Action Conference]. Matt, welcome.

Matt Schlapp: Great to be with you again, Rob.

Bluey: Congratulations on another great CPAC.

Schlapp: What do you think?

Bluey: It is truly energizing. … This year [there’s] a lot of buzz. You started off with the vice president on the first day. You closed with President [Donald] Trump. I mean, just jam-packed in between.

Schlapp: Since you’re the expert on social media, we did OK?

Bluey: I’d say you’re generating quite a bit of buzz.

Schlapp: And that’s one of the reasons why CPAC is important. For whatever reason, it garners all this attention. That’s why we love having people like you here and The Heritage Foundation and others, because this is an important moment for the movement.

Bluey: It certainly is. Now, I want to ask you about this year’s theme, America vs. Socialism.

Bluey: What went into your thinking on that?

Schlapp: Did you think it was too hardcore?

Rob: You couldn’t have planned it much better.

Schlapp: It’s true because we had to pick it weeks ago.

Schlapp: Our view is that we want CPAC to be about what’s going on in society. What is actually unfolding on their television screens, in newspapers and magazines online. And we thought, “Well, boy, really what this country is facing, what the Democratic Party, specifically, is facing is, are we a socialist party or are we just a central left party?

But that’s a bigger question for America as people worry about what’s being taught in the public schools, this hatred of America. America is a bad place, a secular society that doesn’t understand anymore that it’s God that gives us our rights. Government doesn’t get ownership. They don’t have title to our rights. These types of themes are very much at threat.

We also picked America vs. Socialism because we didn’t want to just say “Capitalism vs. Socialism,” which I know several of our speakers have gone to, but to us it’s beyond economics.

The economics of socialism … it fails. But there’s another question about socialism, which is our video, I think. I hope you’ve seen it and hope you’re helping us push it around, but if you believe in socialist economics, you trample on the rights of the individuals—

Schlapp: … to try to help the collective. The individual loses out and what you really find out is more individuals face pain and misery and loss than are helped by the redistribution. Even if it’s intended to help. And under a free society, as you know, that’s exactly the opposite, which is your rights are respected, hopefully.

Schlapp: Which is a real question in America. And it actually helps more people at the bottom end of the economic ladder, which Ivanka Trump, I think, did a beautiful job of explaining today.

Bluey: Yeah, no, it is so true. And thank you, by the way, for the content that you do create. I think it’s so important to educate the American people about these stark contrasts that we see.

… The thing that CPAC is really known for is the enthusiasm among the youth that come here every year. What does it tell you that these polls … show that young people gravitate toward socialism? And what can we do to change that?

Schlapp: Let me explain something. I wish AC was better than it actually is. We do great things, but we actually don’t orchestrate all these students being here.

Fifty percent of the people, of the registrants, walking down these corridors are high school or college students, and it just happens. They just get on their laptops or their phones and they sign up and they have to pay.

Schlapp: It’s not even free, which is kind of insane. It really should be free because we should get more to come. So they just sign up—every year it’s about 50%, sometimes it’s more. It’s a marketplace. People have the right to decide whether they want to come or not. And for whatever reason, students want to be at CPAC.

Now, why do conservatives all want to come together? I think God figured this out when he inspired the Ten Commandments and said, “Hey, keep holy the Sabbath. Come together, have fellowship.”

I don’t view my politics as a church, but I actually think those involved in the conservative movement, we want to have our places, and The Heritage Foundation is big on this too, places where everyone can come together.

You want to learn, you want to just make friends, you want to know you’re not alone. I mean, in the era of Trump, the kind of political persecution is just terrible.

Schlapp: And when you come here you feel like you can be full-throated in what you believe.

Bluey: Yeah. It’s so important to convene and have those face-to-face conversations, even in this digital age that we live in. And CPAC really provides an opportunity to do that.

Not only are there great speakers on the main stage, but you also offer a lot of training workshops. I spoke at one today about social media. It is just incredible. The questions that people have, the enthusiasm they have to want to leave CPAC and carry that energy with them.

Schlapp: And we drive no attendance. So people sign up for tickets. We don’t market much. It’s 10,000 people. It’s every media conglomerate all over the world now because we did five CPACs overseas.

So in your breakout session, or in your training session, we didn’t really [do marketing] besides just [going] online or sending out the nominal emails.

Bluey: That’s right. They certainly have. You mentioned the international events. Tell us about—

Schlapp: You’re going to come with us next year.

Bluey: It is amazing.

Schlapp: You really should.

Bluey: When I walked in, the first thing I saw was all of the CPAC events that are happening. So tell us about that strategy and what you’re hoping to do there.

Schlapp: Once again, I would love to say that we’re brilliant and that we thought about all this, but we actually had people who just started—we had [a] Japanese conservative [that] started a Japanese Conservative Union and they came to CPAC the first year I was chairman. And I was like, “What is this?”

All of those countries are very worried about a resurge in China. So this whole anti-communist concern, the question of socialism. Communism is very alive in that region of the globe and … they’re desperate for a grassroots conservative movement in their country.

We were invited to go be with the protesters as the first Westerners to go stay with the protesters in Hong Kong. I’ll never forget those moments. Those people are brave. They’re mostly children. I call them children. Some as young as 12 years old who have been in prison. They’re missing, some have died. The struggle over there …

One of our speakers, Jimmy Lai, who is from Hong Kong, who’s a big media tycoon, they arrested him yesterday. He was going to come here to speak.

So, Brazil, we’re going to talk about it at the Reagan Dinner tonight. We went and had our first CPAC in Brazil. I think we have 25 other countries that are clamoring to have a CPAC in their country. We have more demand than we know how to satisfy. This is our … what would William F. Buckley say?

Schlapp: What would Ronald Reagan say? None of us are perfect. I’m sure there’d be things that they might not like as much as others. But I think, if they saw the conservative movement today, I think they’d be shocked.

Bluey: I think that they’d be very proud of the growth and the expansion. One final question for you. You are somebody who brings a lot of energy in your TV appearances. You don’t hold back in terms of debating these big ideas. Tell our listeners what really motivates you every day to make sure that you’re carrying forward that conservative vision.

Schlapp: I think it’s a really bad aspect of what’s going on in our culture. What some people call the “cancel culture.” That there’s not a place for left and right to talk anymore. And I’ve always had great friends on the left, and you know what most of those friends have done with me over the course of the last five years? They’ve unfriended me.

Schlapp: Nicole Wallace on MSNBC was a great friend and we got in a squabble a couple of years ago with Michael Steele and she unfriended me on Twitter. She basically said she didn’t want to be my friend anymore. I still want to be her friend. I want to be everyone’s friend, and I think we should be able to talk with each other.

What is not consistent with being an American is making people feel shamed for being Christian, for being pro the Constitution, for knowing and cherishing our history. That must stop.

And these kids who are here, most of them are victims in this battle. And it’s got to stop.

I tell all these people that aren’t students, “Stop whispering. Stop having your MAGA hat hidden in your drawer. Wear it. Wear it with pride. Talk about these things with pride. Come to CPAC. Feel pride in what you’re doing.” And I don’t think we should be shamed for it and it’s wrong. And I know you agree with me.

Bluey: I certainly do. Well, Matt Schlapp, thank you for standing up for America—

Bluey: … and promoting conservative values. We appreciate it.