How the Left Seeks to Undermine America’s Elections 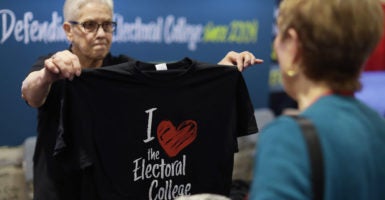 A woman at the Save Our States booth displays an "I Love the Electoral College" T-shirt Thursday during the annual Conservative Political Action Conference in National Harbor, Maryland. (Photo: Alex Wong/Getty Images)

America’s free and fair elections are under threat at the local and state level and in the movement to switch to a national popular vote to pick presidents, speakers said Saturday at an annual gathering of conservative activists near Washington.

Two panelists during a session at the Conservative Political Action Conference, known as CPAC, explained how the nation’s electoral system is under siege and why it matters.

Harmeet Dhillon, a lawyer who is member of the Republican National Committee for California, said Democrats have manipulated elections and made it easier for voter fraud to take place.

Republicans stood by and allowed “same-day voter registration,” Dhillon said, and “they’ve allowed no voter ID; less than a third of our states actually have voter ID, whether it’s a strong system or a weak system.”

“Republicans have allowed so-called nonpartisan redistricting commissions that are effectively run by Democrats,” she said.

A Republican donor, Dhillon said, backed the “top two” primary system in California, which effectively has kept Republicans off the general election ballot. She added:

Dhillon said ballot harvesting—a process in which third parties collect absentee ballots and deliver them to election officials—is another way that elections can be skewed.

Trent England, director of Save Our States, a nonprofit dedicated to protecting the Electoral College, talked about the left’s efforts to fundamentally change how America elects presidents.

England explained the National Popular Vote Compact, an effort to elect presidents based on the popular vote in each state rather than the Electoral College, and why he thinks the current system is essential:

When you go back and read the records of the Constitutional Convention, you find that—we hear about the compromise that created Congress and all these fierce arguments they had—you know what they spent more time [on], at least more weeks than anything else, was how to pick the president.

England, also executive vice president at the Oklahoma Council of Public Affairs, said the framers of the Constitution developed the Electoral College after a process that took several months.

“After the convention,” England said, “this was a part of the Constitution that was popular with basically everybody.”

One of most important aspects of the Electoral College system is that it enforces “checks and balances” in presidential elections, he said.

That system ensures that the biggest cities and population centers are not the only places that have a say in picking presidents, England said. This forces candidates to appeal to wide swaths of the population.

What the national popular vote movement is really about, he said, is rigging the system, undoing the work of the Founders, and “creating a political environment where they can systematically and permanently disenfranchise small towns and rural America.”

America is “73% on the way to enacting the national popular vote,” he said, given how many states have joined the National Popular Vote Compact.

Though proponents argue that it won’t destroy the Electoral College, England said, it effectively would do so.

The Electoral College would go on as a “zombie” constitutional system that essentially would just “rubber stamp” the national popular vote, he said.

Adopting the national popular vote to pick a president is a way to abolish the Electoral College without having to go through the lengthy and difficult process of amending the Constitution, England said.

“If they did that, they would force chaos and fraud into the electoral system in a way we’ve never experienced because they could steal elections by stealing votes in Los Angeles and Chicago,” England said. “Today, all they can do in Chicago is steal Illinois.”