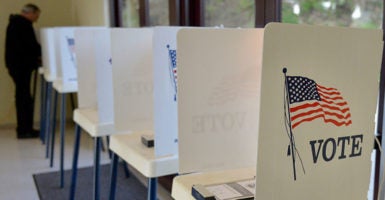 California’s secretary of state and Legislature have launched investigations of the state’s automatic voter registration system, which officials say enrolled noncitizens and minors and got addresses wrong.

Democrats in Congress are promoting automatic voter registration nationally, as part of legislation dubbed the For the People Act, also known as HR 1.

The state’s automatic voter registrations in question occurred through the California Department of Motor Vehicles.

“Our poll observers documented hundreds of voters who attempted to vote at the polls [but] had been changed to vote-by-mail voters by the DMV without consent, had not received vote-by-mail ballots, and were forced to vote provisionally,” Ellen Swensen, chief analyst for the Election Integrity Project California, told The Daily Signal.

Since California implemented its automatic registration system in April 2018, the DMV has admitted to mishandling related information for 23,000 drivers—including noncitizens and those who are too young to vote.

Clerical errors led to double-registering as many as 77,000, the department said.

“A lot of voters did not receive their vote-by-mail ballots. Others were registered at the wrong address,” Swensen said. “There were people who were disenfranchised because they had to cast provisional ballots, through no fault of their own, and there is no guarantee provisional ballots will be counted.”

“I am committed to working with new leadership at DMV and the new administration to ensure integrity of the motor voter program and accuracy of the data,” Padilla said last month in a written statement, referring to Gov. Gavin Newsom, a Democrat.

Padilla’s office did not respond to phone and email inquiries from The Daily Signal.

“The problems with motor voter have risen to such a degree that there is a bipartisan effort in this,” state Assemblyman Jim Patterson, R-Fresno, told the TV station.

“The errors include registering 16-year-olds to vote,” Patterson added, and “we have numbers of people who have their registration changed without their approval or knowledge.”

Problems for voters included “sending them ballots they could vote through the mail,” he said.

California’s Legislature passed and then-Gov. Jerry Brown, a Democrat, signed the motor voter law in 2015 and it had been phased in by April 2018.

About 4,600 errors involved registered voters who didn’t want to register to vote, according to the Lawyers Democracy Fund, an advocate of clean elections. In October, shortly before the Nov. 6 election, the state DMV said an additional 1,500 people were registered who should not have been registered.

In some cases, late-counted ballots in California reversed the results on election night.

For example, Rep. Mimi Walters, a Republican, appeared to have won re-election with a 6,200-vote lead. However, after mail-in and provisional ballots were counted, Democrat Katie Porter won the race to represent the 45th Congressional District.

Similarly, Republican Young Kim led Democrat Gil Cisneros on election night in their race for the open seat in the 39th Congressional District. But Cisneros was declared the winner after new votes came in days later.

“This is not just conservatives concerned about this,” Logan Churchwell, communications and research director for the Public Interest Legal Foundation, told The Daily Signal, noting the ACLU’s involvement.

“What I expect to shake out from the audit is that noncitizens will be registered,” Churchwell said. “That minors, 16-year-olds getting their license, and 15-year-olds with a learners permit will be registered. Addresses will be incorrect. The least surprising will be that party registration was wrong.”

On the subject of party registration, Churchwell said that after Oregon adopted automatic voter registration before the 2016 election, a clerical error put voters who opted not to register as either Republican or Democrat into the Independent category.

The problem for Oregon is that the state has an official Independent Party. So, Churchwell said, primary voters who thought they were unaffiliated were required to vote in a third party’s primary.

“Anytime you change the voter registration laws, it’s justified as a way to help more people vote,” Churchwell added. “DMV clerks already have to ask someone if they want to register to vote. That logic falls apart when this doesn’t increase voting, but does increase data. The California secretary of state’s office sees a six-figure increase in records.”

“The whole push behind automatic voter registration is a fallacy,” von Spakovsky, a senior legal fellow at Heritage, told The Daily Signal:

The fallacy is this belief that not getting registered to vote is what keeps people from voting, that the reason we’ve had declines in turnout is because of that. All the evidence shows that it’s extremely easy to register to vote.

After every federal election, the Census Bureau does a survey of nonvoters, and they ask them why didn’t you vote. The overwhelming majority of people [say] it has nothing to do with any kind of difficulty getting registered. The reason people don’t vote, the overwhelming majority say, is because they’re not interested in elections, they don’t think it will make a difference in their lives, they don’t like the candidates. It has nothing to do with the procedural rules of registration because it is so easy to register.