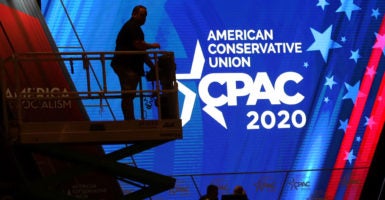 “What they’re talking about today is ‘Nobody pays anything, except the rich,’" Matt Schlapp says Thursday in the opening segment of the Conservative Political Action Conference. Pictured: A setup crew Wednesday puts the finishing touches on the staging of CPAC at the Gaylord National Resort and Convention Center in National Harbor, Maryland. (Photo: Alex Wong/Getty Images)

Today’s liberals offer the security of socialism to young Americans, but there isn’t enough money on the planet to deliver what they promise, the chairman of the American Conservative Union said Thursday before a huge gathering of conservative activists.

“Maybe it was fuzzy math, but the intention was that we’ll hold onto these resources to give you something when you need it,” Matt Schlapp said at the annual Conservative Political Action Conference, referring to Democrats’ New Deal programs instituted in the 1930s.

“What they’re talking about today is ‘Nobody pays anything, except the rich,’” Schlapp said. “By the way, the rich are all of you. Anyone with a job is rich. The rich will take care of providing freebies for everyone.”

Sen. Mike Lee, R-Utah, joined Schlapp for a discussion covering socialism, the modern Democratic Party, and the state of Donald Trump’s presidency to open CPAC, which Schlapp’s organization puts together each year.

Brian Kilmeade, co-host of Fox News Channel’s “Fox & Friends,” acted as moderator for the segment called “E Pluribus … Out of Many, What?”

Nowhere in the Constitution, Lee said, is the federal government empowered to give everything to the nation’s citizens, much less illegal immigrants.

“The problem with that is a government that promises to provide everything for you can take everything away from you,” Lee said.

Lee said he was skeptical at first that Trump is a true conservative, noting that he was “one of the latest on the Trump train.”

His doubt went away as soon as Trump took office in January 2017, Lee said, as the president’s economic, social, and foreign policies demonstrated his commitment to conservatism.

This conservative approach is vastly different than the large-scale changes that today’s liberals and socialists aim to make, Schlapp said.

The Democratic Party increasingly has unmasked itself as socialist, Lee said. Democrats used to avoid the moniker like the plague, he said, but many now embrace what they really are.

“I think that brings heat to the moment,” he said.