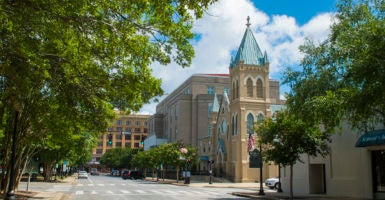 A view of Palafox Street in downtown Pensacola, Florida, includes the Basilica of St. Michael the Archangel. An appeals court last week upheld the constitutionality of the Bayview Cross, less than 3 miles away in the city's Bayview Park. (Photo: Education Images/Universal Images Group/Getty Images)

Their case wasn’t technically over, but eight months ago, when the Supreme Court ruled on the cross-shaped monument in Bladensburg, Maryland, residents and officials of Pensacola, Florida, couldn’t help cheering.

If the justices thought removing the large World War I memorial from public property in Maryland would be “hostil[ity] toward religion,” then it certainly boded well for the cross in Pensacola’s Bayview Park. Turns out, the Pensacola folks were right.

“We won’t bury the lead,” judges of the 11th U.S. Circuit Court of Appeals wrote Wednesday. “Having reconsidered this case in light of [the Supreme Court’s decision in the Maryland case], we conclude that … Pensacola’s maintenance of the Bayview Park cross does not violate the First Amendment.”

The appeals court’s 42-page opinion put to rest (at least for now) a long-running feud the American Humanist Foundation and the Freedom From Religion Foundation have had with the oceanside city.

Taking a second look at the 78-year-old structure, erected by the local Jaycees and known as the Bayview Cross, the judges agreed that it is “embedded in the fabric of the Pensacola community” and removing it might strike some as offensive or anti-faith.

“Religious symbols aren’t like graffiti that the government has to erase as soon as someone complains,” Goodrich said. “The Supreme Court has rightly ruled that governments can recognize the important role of religion in our history and culture.”

And in a city with more than 170 displays focused on culture and history, why let outsiders pick on this one?

It’s another big win for religious liberty. [These crosses] show the role that religion plays in the public and in people’s lives and communities—specifically in times of suffering. The predominant faith that the community [has] really manifests itself. And that’s exactly what happened in Pensacola.

It was right before World War II in times of a national crisis. The community came together and put up this cross. So it’s definitely reassuring to know that these symbols and these signs of faith and strength in a community and everything else is going [to] stand. And hopefully, people will stop coming after these.

The momentum for these cases involving religious displays and monuments has to be on the side of freedom.

Supreme Court Justice Clarence Thomas went so far as to say that he would scrap limits from all aspects of analysis of the Constitution’s Establishment Clause.

“So it definitely seems, with the appointment of Justice [Brett] Kavanaugh and more of a conservative [Supreme Court] majority, that this really could be a new era for religious liberties in the courts,” Johnson said.