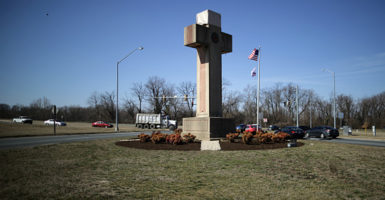 The Supreme Court ruled 7-2 Thursday that a cross-shaped war memorial on public land in Maryland doesn’t violate the Constitution.

In the case of American Legion v. the American Humanist Association, the atheist group had sued seeking removal of the 40-foot Peace Cross in Prince George’s County—just outside Washington, D.C.—contending that the World War I memorial was contrary to the separation of church and state.

However, a supermajority on a court that is often closely divided on hot-button issues determined the history of the Peace Cross erected in Bladensburg, Maryland, doesn’t indicate it promoted a religion, Christianity, in honoring 49 local men who died in the war.

“For nearly a century, the Bladensburg Cross has expressed the community’s grief at the loss of the young men who perished, its thanks for their sacrifice, and its dedication to the ideals for which they fought,” Justice Samuel Alito wrote in the majority opinion for the court.

Alito went on to quote Justice Stephen Breyer’s words from a previous case also hinging on the Constitution’s Establishment Clause.

“It has become a prominent community landmark, and its removal or radical alteration at this date would be seen by many not as a neutral act but as the manifestation of ‘a hostility toward religion that has no place in our Establishment Clause traditions,’” Alito wrote.

The high court in its ruling shot down a 4th U.S. Circuit Court of Appeals ruling that determined the memorial was unconstitutional, siding with plaintiffs who argued it violated the separation of church and state.

The cross-shaped monument, constructed between 1919 and 1925, stands on property owned by the Maryland-National Capital Park and Planning Commission, a government agency created by the state of Maryland.

The American Humanist Association, representing some Prince George’s County residents, sued in 2014 to force removal of the memorial, naming both the Park and Planning Commission and the American Legion, which originally helped pay for it.

“This is a landmark victory for religious freedom.  The days of illegitimately weaponizing the Establishment Clause and attacking religious symbols in public are over,” Kelly Shackelford, president of First Liberty, a law firm defending religious freedom that litigated the case, said in a formal statement on the ruling.

“Our founders would have been appalled at this attempt to make the government hostile to our religious heritage, history, and symbols,” Shackelford said.

The American Humanist Association said it would move to limit the scope of the ruling.

“In the face of today’s decision, we must all pursue new avenues to bolster the First Amendment,” Executive Director Roy Speckhardt said in a prepared statement. “Our legislative efforts will be redoubled as the American Humanist Association works to strengthen the wall of separation between church and state, brick by brick. And in the interim, our legal team will do what it can to narrow the breadth of this decision in courtrooms across the country.”

The high court ruling marked a win for all Americans, said Emilie Kao, director of the DeVos Center for Religion and Civil Society at The Heritage Foundation.

“The founders envisioned a public square where Americans of all faiths, and even those with no faith, would be free to express their beliefs,” Kao said in a written statement.

“Throughout our history, Americans have used religious symbols to commemorate meaningful events—from legislative prayer to observing holidays and expressing the principles of justice,” she said.

But, Kao added, the Supreme Court could have done more.

“While the court decided this case correctly, it did not clarify its own confusing and contradictory standards for deciding other Establishment Clause cases. Even though four justices criticized the long-discredited 1971 decision in Lemon v. Kurtzman and its ‘shortcomings,’ they did not vote to overturn this distortion of the Constitution,” Kao said.

“The Constitution as written, not the personal views of judges, should guide how the American people express their religious faith in the public square.”

This report has been updated to include comments on the ruling.