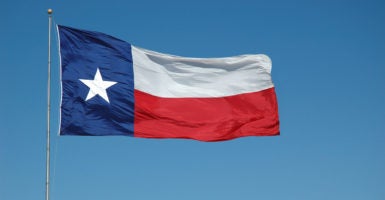 Texas Attorney General Ken Paxton is asking the U.S. Supreme Court to strike down California’s ban on state-funded travel to Texas and 10 other states with policies that uphold religious freedom.

In a lawsuit filed Monday, Texas argues that California is imposing economic sanctions against the state, its citizens, and its businesses because Texas protects faith-based foster care and adoption agencies.

“The law California opposes does not prevent anyone from contributing to child welfare; in fact, it allows our state to partner with as many different agencies as possible to expand the number of safe and loving homes available to foster children,” Paxton said in a press release.

In 2017, the Texas Legislature passed legislation (HB 3859) allowing faith-based foster care and adoption agencies to refuse to place children with same-sex couples or in other homes in violation of their religious beliefs. This action prompted the addition of Texas to California’s travel ban.

Texas holds that it acted in accord with the federal Religious Freedom Restoration Act, under which those with sincerely held religious beliefs may be exempt from the requirements of certain laws unless a compelling government interest exists to infringe on their religious liberty.

California’s discriminatory practice of coercing other states to increase burdens on religion, the lawsuit argues, violates the Constitution’s clauses covering privileges and immunities, interstate commerce, and equal protection under the law.

“California is attempting to punish Texans for respecting the right of conscience for foster care and adoption providers,” Paxton said, adding: “Boycotting states based on nothing more than political disagreement breaks down the ability of states to serve as laboratories of democracy while still working together as one nation—the very thing our Constitution intended to prevent.”

California banned taxpayer-funded travel to all but two targeted states for their actions to protect religious liberty. California added Iowa and North Carolina to the travel ban for bucking the LGBT political agenda on sex-reassignment surgery and public restroom use, respectively.

The Texas lawsuit seeks to strike down the travel ban against states for upholding First Amendment protections for religious liberty.

Tennessee and Oklahoma implemented their own travel bans against California, with the hope of pressing that state to rescind its action.

Texas seeks a judgment from the Supreme Court declaring California’s economic sanctions against Texans unconstitutional and ordering California to remove Texas from its travel ban list.