‘Multiple Men’ Were ‘Ready to Take a Bullet for Any Single One of Us,’ Says Woman Who Survived California Shooting 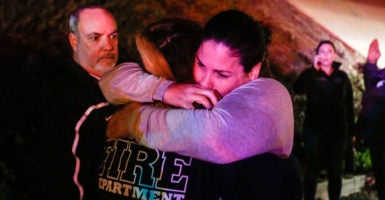 Witnesses comfort each other outside the Borderline Bar and Grill where a gunman shot people in Thousand Oaks, California, on Nov. 8, 2018. (Photo: Zhao Hanrong Xinhua News Agency/Newscom)

Multiple men reportedly put their bodies on the line to protect patrons at the club in California where a gunman entered Wednesday night, killing 12 and reportedly taking his own life.

“While we were all dog-piled at the side, there were multiple men that got on their knees and pretty much blocked all of us with their backs towards the shooter, ready to take a bullet for any single one of us,” Teylor Whittler, a woman who had been in the club during the shooting, said Thursday morning, reported ABC News.

“And just the amount of people who made sure everyone got out OK or if they were out … they made sure, they went around to every single person around them and asked them if they were OK and if they needed a phone to call their family … just in general any way they could help. It was awesome,” she continued.

Woman who was celebrating her 21st birthday at Thousand Oaks bar where shooting broke out: "There were multiple men that got on their knees and pretty much blocked all of us…ready to take a bullet for any single one of us." https://t.co/109XGLelzj pic.twitter.com/6BbeE2XkfE

The gunman entered Borderline Bar and Grill in Thousand Oaks Wednesday night around 11:20 p.m. and opened fire at a crowd of mostly college students using a semi-automatic pistol. It was “country night” at the bar.

The suspect is identified as 28-year-old David Ian Long, who reportedly dressed in a black hooded sweatshirt. The gunman and Ventura County Sheriff’s Deputy Ron Helus is among the dead, according to NBC News.

Hundreds of people attended a procession for Helus Thursday.

Eighteen other victims were injured while trying to escape from the club during the shooting. They are being treated at local hospitals, according to Ventura County Fire Department Capt. Stan Ziegler.