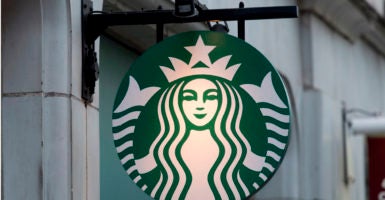 Starbucks UK has partnered with Mermaids, a nonprofit group that provides support for transgender youth, on an advertising campaign, #WhatsYourName, celebrating gender transition.

Starbucks said in a press release that learning each customer’s name and calling it out with his or her order “creates a moment of connection between our baristas and customers,” and that the #WhatsYourName campaign “celebrates this signature act and the significance it can have for some transgender and gender-diverse people as they use their new name in public.”

“We discovered that they found Starbucks stores to be a safe space, where their new name was accepted, and they could be [recognized] as who they are,” the announcement said. “We were moved to discover that individuals find our stores a safe space to try out their new names when transitioning.”

The campaign includes a TV commercial that will air on the United Kingdom’s Channel 4 throughout February and March, and a special “mermaid tail” cookie, proceeds of the sales of  which will support Mermaids’ transgender help line.

The commercial follows a young person in the midst of transitioning from female to male who wants to be called James, but keeps getting reminders of her given name, Jemma. Only at Starbucks, it seems, is the person able to have the new identity validated, when the barista writes “James” on the cup without question.

It won Channel 4’s Diversity in Advertising Award, which the release says, “provides us with an ideal platform to demonstrate how moments of connection can have real impact, while also helping to address the transgender community’s lack of representation in UK advertising.”

The advertisement was created in conjunction with Mermaids, which supports lifting most barriers to gender transition for teenagers over 16. It will receive at least 100,000 British pounds (about $130,000) from the partnership.

“The [advertisement] was inspired by the discovery that many of our transgender service users were [trying out] their chosen names at Starbucks stores across the UK,” according to a Mermaids press release. “For some people, this was the first time they’d heard someone else [recognizing] their true identity.”

Emilie Kao, director of the DeVos Center for Religion & Civil Society at The Heritage Foundation, criticized the campaign.

“Starbucks has chosen to use its massive corporate power to promote an ideology that harms vulnerable children,” Kao said in an email, adding:

The activist group they have chosen to partner with has tried to overturn restrictions on permanent, sterilizing procedures offered to minors with gender dysphoria.

Puberty blockers, hormones, and surgeries aren’t the answer for kids who are struggling to accept their bodies, and Starbucks shouldn’t promote the idea that they are.

The campaign is limited to the U.K., and no U.S. Starbucks will participate.