Why UK Defense Must Go on Offense 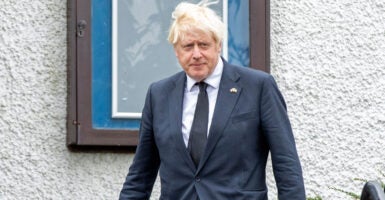 Boris Johnson—seen here departing after attending the funeral for David Trimble in Lisburn, Northern Ireland, on Monday—has announced his intention to step down as British prime minister. Whoever succeeds him will need to turn around a declining British military. (Photo: Paul Faith/AFP/ Getty Images)

Greyson Hoye is an intern in the Margaret Thatcher Center for Freedom at The Heritage Foundation and a member of Heritage’s Young Leaders Program.

Following a wave of Cabinet and ministerial resignations, Boris Johnson has announced that he will step down as the prime minister of the United Kingdom. Now, Britain and the world are left to wonder who will be next to command its ship of state.

Whoever it might be, the next prime minister must make defense a top priority.

During his three years at 10 Downing Street, Johnson has been a strong supporter of NATO, and he helped forge the landmark AUKUS defense agreement with the United States and Australia.

Johnson has also spearheaded Western efforts to provide weapons, training, and financial aid to Ukraine as it seeks to repel Russia’s invasion.

Even before the invasion, Britain had begun shipping next-generation light anti-tank weapons to Ukraine, and as of July, the U.K. had pledged almost 4 billion pounds in financial aid. The British military has set a goal of training 10,000 Ukrainian troops every 120 days and the Royal Artillery has instructed nearly 500 soldiers on the use of advanced ordnance and targeting equipment.

Meanwhile, however, Britain’s armed forces have expanded at a much slower pace, despite a deteriorating global security environment.

In late June, Johnson announced that the U.K. would allocate 2.5% of its gross domestic product to defense by 2030, a mere 0.2% increase from what the country is currently spending—and the increase would not take full effect until eight years from now.

That contradicts the 2019 Conservative Party platform, which stated that the government would “continue to exceed the [NATO] target of spending 2 percent of GDP on defense and increase the budget by at least 0.5 percent above inflation every year of the new parliament.”

Admittedly, no one expected that inflation would reach current levels. But there remains a lot of room for improvement. Since the U.K. includes funding for pensions and U.N. peacekeeping missions in its defense expenditure figures, its spending on hard military capability has actually been less than 2% of GDP since 2014.

To make matters worse, Britain is delaying procurement and downsizing its armed services. In April, the Defense Ministry postponed the purchase of 14 Boeing Chinook helicopters. The delay was attributed to budget constraints, but the aircraft will cost an estimated 295 million pounds more in three years’ time, when the purchase will officially take place.

Furthermore, the British army plans to cut 10,000 troops by 2025. With numbers already dwindling as the military shifts toward cyberwarfare and unmanned platforms, there are currently only 81,000 active-duty personnel, and the planned cut will reduce its army to its smallest size since 1714.

The war in Ukraine has roused the West from its peacetime slumber with a sobering truth: Although cyberspace is increasingly the battlefield du jour, at the end of the day, we still need boots on the ground, ships on the seas, and planes in the air.

That reality has not been lost on the U.K.; otherwise, it would not be diverting capital, manpower, and materiel to assist Ukraine. Now, the government must afford the same attention, long overdue, to Her Majesty’s own armed forces.

A strong Britain is essential to American interests and to the two countries’ special relationship on the world stage. The U.K. has been a steadfast American military partner for decades, from the Allied landings in Normandy to joint special operations in Syria.

Even as technologies and strategies evolve, the United Kingdom remains an invaluable strategic military partner for the United States.

Together, America and Britain led the Allies in two world wars and established NATO to prevent Soviet—and now Russian—expansion in Europe. Today, the two nations have crafted groundbreaking multilateral agreements, such as AUKUS and Five Eyes to counter malign authoritarianism across the globe.

This long-standing cooperation has undergirded international security, and the U.S.-U.K. special relationship must form the cornerstone of future defense strategy.

The Ukraine conflict has laid bare the fact that countries such as Germany and France are not reliable partners in standing up to Russia. It’s now more important than ever that the U.S. and the U.K. properly fund their defense apparatuses and promote cooperation between their armed forces.

The U.K. is currently mired in an awkward transition period, stuck with aging or insufficient equipment as it seeks to upgrade to new technology.

The British army’s main battle tank, the Challenger 2, entered service almost 30 years ago, and the Royal Air Force has only nine P-8 Poseidon anti-submarine aircraft, at a time when Russia’s massive submarine fleet—unaffected by the Ukraine war—has increased its patrols in the North Atlantic to historic levels.

“We are not at war, but must act rapidly so that we aren’t drawn into one through a failure to contain territorial expansion,” he said.

At the onset of World War II, Winston Churchill recognized that the U.K. needed to support France in its fight for freedom while simultaneously building up its own defense and turning to the U.S. as the arsenal of democracy. So, too, must the forthcoming new prime minister equip Britain to effectively face current threats and partner with the United States in defense of the West as a whole.