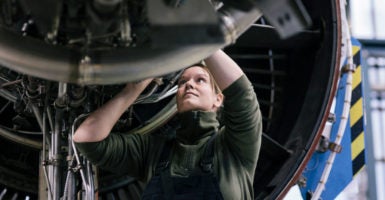 The new jobs report shatters experts’ predictions and continues to make the case that, because of good economic policy, America is flourishing. (Photo: Stock/Getty Images)

The U.S. economy added an impressive 225,000 jobs in January as low unemployment rates continued for all Americans.

The new jobs report shatters the experts’ predictions and continues to make the case that, because of good economic policy, America is flourishing.

This report shows that since President Donald Trump was elected in November 2016, employment gains have surpassed 100,000 jobs in 35 out of the past 38 months and have been positive for a record-setting 112 months.

This suggests that while people may not have a job, they are actively looking for one, which is reflected by the increase of 183,000 in the number of Americans reentering the labor force.

The labor force participation rate for January represents the highest so far for the Trump administration. In this instance, a higher unemployment rate is a good sign; more Americans have decided to leave the sidelines of the long-term unemployed and now are looking for work.

So why are Americans jumping back into the labor force?

One factor is that the nation currently has 6.8 million jobs open, and the other is wage growth. Last month, average hourly earnings for all employees rose by 7 cents to $28.44 an hour. This was a .2% increase from December’s 2.9% growth, and keeps us at a healthy average growth rate of 3.1% over the past 12 months.

Nonmanagerial wages also are growing faster than the average. Production and nonsupervisory workers saw wage gains of 3.3% over the previous year.

In addition to drawing Americans back into the workforce, this wage growth, coupled with a slower rise in prices in recent months, suggests that consumer spending will continue to help drive economic growth.

Americans are more optimistic about their financial futures than any time in our history, according to a new Gallup survey.

Here’s where we saw gains and losses last month:

This is a good jobs report, and the president and his conservative supporters in Congress deserve praise for implementing policies to build opportunity and more prosperity. But more needs to be done.

My Heritage Foundation colleague, Joel Griffith, found that net private domestic investment jumped more than 20% (in real terms) in 2018 vs. 2016. Partly as a result of this investment, productivity in the past year increased at the fastest clip since 2010; real wages also increased across the board.

But by the last quarter in 2019, net private investment had dropped by 9% on an annualized basis. Why? Griffith assigns part of the blame to a slowdown in global growth combined with trade uncertainties that mainly involved the Trump tariffs.

The key word in this recipe is “uncertainty.” If business leaders are uncertain about their future, they likely will hold on to their money instead of investing it and expanding. This is a move in the exact opposite direction of economic growth and better job opportunities.

Many of the president’s supporters will suggest that tariffs are a means to an end, and that he has to impose them to make better deals. The heart behind this is understandable.

But the fact is, tariffs do not work to spur greater economic growth; they raise costs and shrink incomes. Tariffs are a tax on all Americans, not just the wealthy, and they do real harm.

The president deserves credit for easing some of the tariffs on China and pushing for more fairness in our trading relationship. But don’t stop at easing, Mr. President, go all the way.

It’s time to abandon tariffs and allow investment to flourish, not stagnate. Let’s keep the good news coming in. It’s always better to start off the first Friday of the month with a positive commentary on the jobs report, not a negative one.