The Pentagon Has a New Common-Sense Acquisition Framework 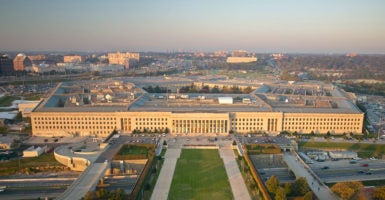 Now, contract administrators in the Department of Defense can choose the best pathway for their procurement project, each with rules and steps more adapted to the nature of the good or service being procured. (Photo: Getty Images)

Under Secretary of Defense for Acquisition and Sustainment Ellen Lord issued DoD Instruction 5000.02, which made her new Adaptive Acquisition Framework official policy.

The different pathways reflect the variety of defense contracts, which can range from last month’s record-breaking Virginia-class submarine contract—which will cost billions of dollars and will take years to complete—to contracts for products needed immediately, such as the mine-resistant, ambush-protected vehicles that had to be deployed in Iraq to protect soldiers from roadside bombings. Production of MRAPs, as they were called, surged from 82 vehicles a month in June 2007 to 1,300 vehicles a month by that December.

These contracts for vastly different goods and services, all operating on different timetables, used to be administered according to a single cumbersome acquisition framework, one designed to prevent program failures or over-budget projects. It involved a tedious series of phases, milestones, and reviews as projects progressed from development to production to operation.

This system worked well for long-term projects and big-ticket items, such as a new class of submarines. But it didn’t make sense for many contracts, especially those for services and software.

Now, contract administrators in the Department of Defense can choose the best pathway for their procurement project, each with rules and steps more adapted to the nature of the good or service being procured.

The new software pathway is particularly important to defense software solutions. Software is often developed cyclically: it is created, then tested by users, whose feedback then is incorporated into a new version, which itself is then tested by users. The traditional system didn’t accommodate this process very well, but the new software procurement pathway has this cycle built in.

When asked the benefits of her proposal, Lord referred specifically to the huge progress on software acquisition: “What we are enabling the industry base to do is really use modern software practices with a contract vehicle that reflects that, that doesn’t constrain them.”

The new Adaptive Acquisition Framework brings better business practices into Department of Defense procurement, which can only help the Pentagon’s relationship with industry. The change hopefully will bring higher-quality goods and services to the department, faster and more efficiently.

Whether the Adaptive Acquisition Framework speeds things up will depend on the leaders who drive its execution. Either way, its creation is a positive sign that the Pentagon finally wants to bring some common sense into contracting.