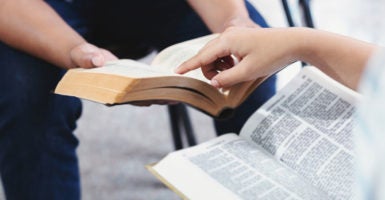 Anti-Catholic prejudice, which spread like gangrene in the 19th and 20th centuries, often manifested itself in so-called Blaine Amendments, which enabled government discrimination against religious families, students, and schools.

This month, the Supreme Court will have the opportunity to overturn one such law.

The scholarship program itself is a good idea—helping parents get their kids into the type of school best suited to their needs. But by citing its Blaine Amendment to lock religious schools out of the program, Montana exerted unconstitutional prejudice.

The Montana program offered a $150 tax credit to private citizens who donate toward scholarships but prohibited families from using the scholarships at religious schools. Montana’s Supreme Court struck down the entire program, and it is this decision the U.S. Supreme Court is being asked to overturn.

Ultimately, the state terminated the program because of controversy over the religious exclusion. That’s when Kendra Espinoza and two other mothers whose children attend religious schools sued the state of Montana.

But the case raises the broader issue of whether America’s diverse student population is best served by homogeneity or by choice.

The case could determine whether parents are free to determine what type of education will help their children achieve that good life.

For many families, values-based education is a critical component in preparing their children to be productive members of society.

A growing body of research demonstrates not only that access to school choice improves academic achievement and attainment, but that private school choice also increases parents’ and students’ perceptions of school safety and has significant positive effects on character development, as seen in increased tolerance, charitable giving, and volunteerism, among other factors.

Montana’s program benefited all families, but then the state passed a rule to reconcile it with the state Constitution’s “no aid” provision (known as a “Blaine Amendment”). Article 10 of Montana’s Constitution prohibits “aid” from going to “any school … controlled in whole or in part by any church, sect, or denomination.”

The high court has commented on the ignoble aims of these amendments in previous cases.

In Mitchell v. Helms, a 2000 case upholding the use of school vouchers, Justice Clarence Thomas wrote, “Consideration of the amendment arose at a time of pervasive hostility to the Catholic Church and to Catholics in general, and it was an open secret that sectarian was code for Catholic.”

Thirty-seven states brought this prejudice into the 21st century, using these laws to exclude religious entities in a variety of contexts, including school choice.

The question for the Supreme Court is whether it will allow states to continue to impose disadvantages upon families like Kendra Espinoza’s as they seek to educate their children according to their own beliefs.

As the Jewish Coalition for Religious Liberty wrote in a friend-of-the-court brief, “The Blaine Amendment forces Jewish parents to confront a Hobson’s choice between their financial security and their community’s religious continuity.”

For an Orthodox Jewish student, a public school can be a difficult place to fulfill his or her religious obligations. To observe Jewish holidays, they cannot write, use electricity, or travel by car or bus, which means they would need to miss approximately a dozen days of school each year.

The Anti-Defamation League notes “absence could wrongly convey the message that school or a class is not important to a student or his or her family.”

Being able to take their share of education funding to a school that aligns with their needs would make a significant difference, putting them on equal terms with students attending non-religious private schools.

The court need only follow its 2017 decision in Trinity Lutheran v. Comer to overturn Montana’s “no aid” provision.

In that case, Missouri was using its Blaine Amendment to exclude a church-run preschool from a state-funded playground improvement program.

Writing for the majority, Chief Justice John Roberts announced that “the exclusion of Trinity Lutheran from a public benefit for which it is otherwise qualified, solely because it is a church, is odious to our Constitution … and cannot stand.”

In the Espinoza case, attorneys for Montana argue that allowing the tax credit to go toward religious schools would force a Jewish resident who doesn’t want to subsidize Christian education to choose between his religious beliefs and the tax credit.

But excluding religious schools from the tax credit program would not end taxpayer money being directed toward diverse schools. It would simply create a one-way street for the taxes of Jews, Catholics, Muslims, and those of other faiths to go toward secular private and public schools where their children cannot learn according to their religious values and traditions.

Finally, Montana argues that the Supreme Court’s 2004 decision in Locke v. Davey is controlling. Washington state had a Promise Scholarship Program that prevented college students from using it to study “devotional theology,” although students were permitted to attend religious schools and take religious courses.

The court upheld the program, explaining that Washington’s decision reflected the “historic and substantial state interest” in declining to subsidize the “essentially religious endeavor” of “[t]raining someone to lead a congregation.”

As the Department of Justice notes, in Trinity Lutheran, the court “interpreted Davey to mean that, where a state denies funds because of what the recipient ‘propose[s] to do’ with those funds, rather than because of the recipient’s identity, the state’s ‘historic’ interests may justify a refusal to fund certain ‘essentially religious endeavor[s].’”

But Montana has categorically denied funds to religious schools and families because of their status and identity, not because the funds were being used for an essentially religious endeavor or purpose such as clergy training.

In the Supreme Court’s recent establishment clause decision, American Legion v. American Humanist Association, which permitted a cross-shaped World War 1 memorial to stand, Justice Samuel Alito wrote that “the religion clauses of the Constitution aim to foster a society in which people of all beliefs can live together harmoniously.”

Similarly, as Greene writes, “Americans’ concern for liberty should incline them toward respecting different approaches to education.”

In Espinoza, the court should interpret these principles to mean that a state should allow parents to choose how to use a privately funded scholarship administered by the state.

Protecting religious freedom against official prejudice will foster social harmony by allowing all families to educate the next generation according to their unique values and traditions.