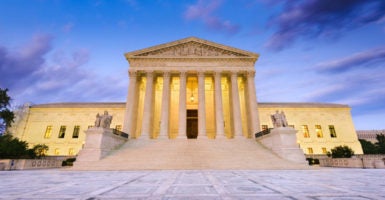 The Supreme Court heard oral arguments on Wednesday in a religious liberty case between a Lutheran church and the state of Missouri. (Photo: iStock Photos)

On Wednesday morning, the Supreme Court heard oral arguments in Trinity Lutheran Church’s case against the state of Missouri—a case involving discrimination by the state in giving out publicly funded grants.

Missouri has a grant program to offset the cost of resurfacing playgrounds with rubber surfaces made from recycled tires. This helps the state reduce the number of tires in its landfills and make playgrounds safer for kids.

Trinity Lutheran Church applied for a grant to resurface its preschool playground. Though its application met all the neutral criteria and was rated highly, Missouri denied that application solely because it came from a church.

The state claims that its constitution required it to reject the church’s request because of a “no aid” provision that prevents public money from going to churches. More than three dozen states have similar laws (known as Blaine Amendments), which were enacted during the 19th century to single out Catholic immigrants for disfavored treatment.

Trinity Lutheran Church argues that using state funds to ensure its playground is safe for kids is a completely secular purpose and the state’s actions demonstrate a hostility to religion.

At the argument, lawyers for both sides faced a very active bench. The justices were talking over each other, trying to get in as many questions as they could in the allotted argument time.

It’s no wonder—the justices had a lot of time to think about this case, since they granted review in January 2016 and appeared to hold off in hearing the case until a ninth justice was confirmed.

Right off the bat, Justice Ruth Bader Ginsburg asked David Cortman, an attorney from Alliance Defending Freedom representing Trinity Lutheran, why a 1947 case saying states don’t have to fund the building of churches doesn’t dispose of this case.

Cortman answered that the court also said states cannot deprive churches of government benefits, and that’s just what Missouri did here. He explained that the justices should look at where the money would be going—to a secular activity.

When Justice Elena Kagan analogized this to a program to put computers in religious schools, Cortman said that this case is easier to decide because unlike computers, a playground doesn’t enable any religious activity.

Justice Sonia Sotomayor brought up the court’s recognition of space between the Establishment and the Free Exercise Clauses that allows states some “play in the joints.” She mentioned that Blaine Amendments—which she called an “admirable tradition” in our nation—prohibit public funds from going to churches.

Justice Samuel Alito asked Cortman if he agreed with Sotomayor that Blaine Amendments reflect an admirable tradition. Cortman emphatically said no, highlighting the anti-Catholic bigotry that animated the passage of many of these laws.

Kagan then asked if Missouri’s action falls within this space between the two clauses.

Cortman explained that while states have tremendous leeway in how they set up programs such as this (e.g. only for public schools), Missouri was clearly singling out churches for disfavored treatment—something the “play in the joints” does not allow.

Some of the justices were clearly concerned about how far states could take these “no aid” provisions. Justice Stephen Breyer repeatedly pressed the lawyer representing Missouri, James Layton, on whether states could decline to offer police and fire protection to churches.

Layton explained that since those benefits are offered to everyone, there wouldn’t be a concern about the state getting entangled in the business of a church or being seen as endorsing a church (both aspects of the Supreme Court’s convoluted Establishment Clause jurisprudence).

In selective programs, such as the recycled tire grant program, Layton maintained that the state could make the decision to exclude churches in order to sidestep any Establishment Clause concerns.

Breyer asked about crossing guards, since they aren’t placed everywhere, and Layton simply said this case is different because it involves physical improvement to the church’s property.

Chief Justice John Roberts asked if the state could offer tours of its capitol building to student groups, but exclude groups from religious schools. Layton replied that this would be another example of a universal benefit, so the state’s concerns about entanglement with a church would not be valid.

Justice Neil Gorsuch came back to this universal/selective distinction later, asking why discrimination based on religious status is permissible in a selective program, but not in a universal program.

Layton fell back on the claim that since this involved a physical improvement to Trinity Lutheran’s property, it’s on the wrong side of the line and looks like state endorsement of religion.

Kagan pointed out that the state’s entanglement and endorsement concerns would need to rise to a high level in order to burden the constitutional rights of its citizens, as it did with Trinity Lutheran.

In his brief rebuttal, Cortman pointed out that there is no endorsement problem here because the state set out neutral, secular criteria for its grant program—criteria that Trinity Lutheran met.

He also took issue with the state’s characterization that giving a one-time grant to the church would constitute entanglement. He explained that entanglement requires the state’s ongoing, intrusive involvement with a church—something that simply would not occur if Trinity Lutheran received this grant.

An issue lingering in the background was the Missouri governor’s eleventh hour decision to announce on Facebook that going forward, he will not exclude churches from this grant program.

This would not, however, change the outcome for Trinity Lutheran. The church could apply for the grant a second time, but there are no guarantees that the governor won’t change his mind in the future.

So, that’s not enough for the Supreme Court to choose not to decide this case.

Now, the justices will deliberate and issue an opinion by the end of the court’s term in June.

Based on the questions at argument today, a number of the justices appeared to be concerned about the state’s lack of a limiting principle on excluding religiously affiliated groups from state grant programs.

If Trinity Lutheran wins the day, it will be a signal to states that they may not discriminate against churches under the guise of Blaine Amendments.