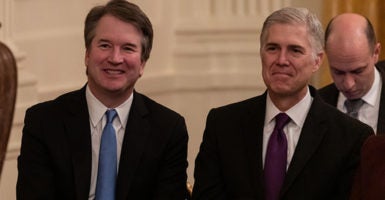 Leonard Leo is reducing his involvement with the Federalist Society, where he played a key role in pushing through the Supreme Court nominations of Brett Kavanaugh (left) and Neil Gorsuch. Leo will join public relations executive Greg Mueller in a new venture called CRC Advisors. The two Trump-appointed justices are seen here in the White House East Room on Nov. 16, 2018. (Photo: Cheriss May/NurPhoto/Getty Images)

One of the leading voices behind President Donald Trump’s drive to appoint originalist judges to the federal courts is teaming up with an influential public relations executive in the Washington area to launch a new project.

Leonard Leo is leaving his post running the Federalist Society, a network of conservatives lawyers, and is partnering with Greg Mueller, president of CRC Public Relations, to form CRC Advisors.

“We have both worked for over three decades to build winning ventures, and our many partnerships have brought success across a wide range of challenges, most notably the many judicial confirmation battles undertaken as part of a broad effort to reshape the federal judiciary, reform our legal system, advance the rule of law, and protect our country’s freedoms,” Leo and Mueller said in a joint statement.

Leo will be chairman of CRC Advisors, while Mueller will be its CEO.

The first focus of the group will be launching an issue advocacy campaign on the judiciary during the 2020 election cycle that will reportedly spend at least $10 million.

Leo is leaving his post running the day-to-day operations of the Federalist Society, but he will remain as co-chairman of the conservative legal group’s board of directors.

The new venture, intended to provide resources across the conservative movement, is reportedly set to be a counterweight to the liberal group Arabella Advisors.

Leo and Mueller studied a tax filing that led them to Arabella, a group behind the Sixteen Thirty Fund, a network of about 50 separate liberal groups at the state and local level that promoted Democratic candidates in 2018, Axios first reported.

The move marks the latest growth of CRC, which is based in Alexandria, Virginia. In 2017, Kellyanne Conway sold her firm, the Polling Company, to CRC Public Relations to take a job at the White House as a top adviser to Trump.

Leo has been with the Federalist Society for more than 25 years, and helped the group increase its membership of conservative lawyers by more than 70,000. Leo advised Trump on the Supreme Court nominations of both Neil Gorsuch and Brett Kavanaugh.

He was also a member of the Trump transition team in 2017. Previously, President George W. Bush appointed him as chairman of the U.S. Commission on International Religious Freedom.

The Heritage Foundation’s John Malcolm, vice president of the Institute for Constitutional Government and director of the Meese Center for Legal and Judicial Studies, praised Leo. For more than two decades, Malcolm has worked with Leo through his involvement with the Federalist Society and also served as general counsel at the U.S. Commission on International Religious Freedom when Leo was chairman.

“Leonard is one of the most strategic, intelligent, and hard-working individuals I have ever met,” Malcolm told The Daily Signal. “I have no doubt this new venture will be a success, and the conservative movement will be all the better for it.”

Leo and Mueller played significant roles in the public debate in pushing through the confirmation of Kavanaugh during 2018 amid an onslaught of opposition from the left.

Mueller worked as a senior aide for the Republican presidential campaigns of Pat Buchanan in 1992 and 1996 and of Steve Forbes in 2000. During his time with CRC, the public relations firm handled campaigns for numerous top-tier conservative organizations, political causes, conservative books, and right-leaning media organizations.

According to the joint statement from Leo and Mueller:

CRC Advisors will leverage the combined experience, expertise, resources, and networks of our merged teams to create a new model for identifying and solving problems, whether in public policy or private enterprise.

CRC Advisors will strengthen our clients by providing strategic guidance and bring together the capabilities they need to win—whether that means shaping public policy, defending reputations, promoting their mission and brands, or any other public-affairs challenge.

We will also incubate public-policy projects, coalitions, and groups which are mission-driven, focused, and results-oriented. And we will connect best-in-class professionals, successful nonprofits, and savvy philanthropists, forging partnerships among them that are tailored for success.

This story was updated after publication.