4 Lessons Conservatives Should Learn From Getting Gorsuch Through 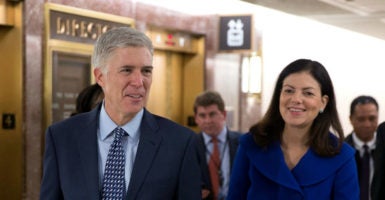 “I think first of all you start with an incredibly talented, well-qualified candidate like Gorsuch and that makes the whole job easier,” Carrie Severino, chief counsel and policy director of the Judicial Crisis Network, told The Daily Signal in an interview.

The Judicial Crisis Network, an organization dedicated to defending the Constitution and what it calls the founders’ vision of limited government, spearheaded a national campaign in January to “preserve the legacy” of Justice Antonin Scalia and worked to help confirm Gorsuch as his successor on the high court.

The Senate voted 54-45 on Friday, mostly along party lines, to confirm Gorsuch as the 113th justice to serve on the Supreme Court. He has served on the Denver-based 10th U.S. Circuit Court of Appeals since 2006.

Severino and several others involved in the confirmation proceedings told The Daily Signal they saw four common themes that serve as lessons:

1. Being Highly Qualified Is Key.

Leonard Leo, an adviser to Trump on Supreme Court matters who has been on leave from the Federalist Society, a conservative legal organization, helped advance the Gorsuch nomination.

Leo told The Daily Signal that finding extraordinary candidates to serve on the high court is one of the most important lessons to take away from the process.

“This process confirms the fact that it’s extremely important to nominate individuals to the court who are one, extraordinarily well-qualified … [and] have a serious, demonstrated commitment to originalism and textualism,” Leo said.

Sen. Mike Lee, R-Utah, who serves on the Senate Judiciary Committee, said in an interview that Gorsuch’s experience was a significant ingredient to the successful confirmation process.

Judge Gorsuch is one of the most qualified Supreme Court nominees in our nation’s history. I was honored to vote to confirm him. pic.twitter.com/e5XvKFNUL6

“I think it all starts with a good nominee,” Lee said. “I think it’s a really helpful ingredient. This nominee was really good at answering questions and talking about the role of the judge.”

Jeremy Adler is communications director of the conservative nonprofit America Rising Squared, or AR2, which worked with Gorsuch’s team to ensure his confirmation. The judge’s qualifications were a significant aid to conservatives in ensuring a smooth confirmation process, Adler said.

“The person that the president chose is so beyond reproach, and that made all of our jobs much easier,” Adler said.

Kelly Ayotte, a former U.S. senator who represented New Hampshire from 2011 to 2017, served as Gorsuch’s “sherpa,” the individual who guides the nominee through the Senate’s confirmation process.

Ayotte told The Daily Signal in an interview  that Gorsuch’s qualifications made the process incredibly smooth:

I think what you can learn is if you pick an excellent nominee with a very strong track record like Judge Gorsuch, having served on the 10th Circuit for 10 years, having been confirmed [by the Senate] previously … all of the desperate, last-minute attacks by the left … just fell flat because this is an impeccable person with just incredible credentials.

2. The Importance of Transparency.

As a candidate for president, Trump released two lists of potential Supreme Court nominees before the Nov. 8 presidential election.

Trump’s combined list was a historic effort to bring transparency to the vetting process, Leo said.

Heritage Foundation President Jim DeMint, a former Republican congressman and senator from South Carolina, said in a statement provided to The Daily Signal that Trump’s list of candidates for the high court was an unprecedented move of transparency.

What stands out the most with #Gorsuch's confirmation is how transparent the process has been since day one. Review: https://t.co/pKU0L0Kpsq pic.twitter.com/I2Ue8buwRy

“What stands out the most with [Gorsuch’s] confirmation is how transparent the administration has been with this process since day one,” DeMint said, adding:

President Trump is the first president to release a list of potential Supreme Court candidates, with the help of conservative legal experts, and let the American people decide if those candidates deserved to serve on the court.

The names Trump released originated from suggestions by The Heritage Foundation and the Federalist Society.

Trump’s decision to release the list and say his nominees would come from it, Severino said, “is something that I think handed him the presidency.”

“It gave the chance to have a lot of people commenting on this list,” Severino said.

The coordination of conservatives, who united forces and worked together for Gorsuch’s confirmation, is another lesson for future Supreme Court appointments, said Elizabeth Slattery, a legal fellow at The Heritage Foundation.

“One lesson is that when the conservative base is motivated, great things can happen,” Slattery said. “Grassroots activists across the country helped make it clear to senators that Neil Gorsuch is the type of justice conservatives want on the Supreme Court.”

Conservative unity also was key to knocking down liberals’ allegations against Gorsuch, which included claims from a former law student, Jennifer Sisk, that he made sexist remarks while teaching a class at the University of Colorado.

Adler said America Rising Squared researched Sisk’s claim “immediately after that attack,” discovering that Sisk was a former staffer for Sen. Mark Udall, D-Colo., and that her claim was a partisan smear.

“I think having her background … was really helpful to sort of just quell the attack and show this is not legitimate, this is just motivated by pure partisanship,” Adler said.

Another dubious claim was that Gorsuch plagiarized writings from the Indiana Law Journal.

Severino said the Judicial Crisis Network spearheaded efforts to research and respond to these accusations with the facts.

Coordinated, rapid responses, Leo said, were a critical ingredient to unifying conservatives and bringing the facts to the public.

He said “a very effective operation” was dedicated to “addressing those charges quickly and with facts, not simply with rhetoric, and that’s actually a very important recipe here.”

“It is an unprecedented … $15 million campaign,” Leo said, “and [Judicial Crisis Network] played a role, but there were a lot of key players.”

Among them, he said, were CRC Public Relations, the National Rifle Association, National Right to Life, and Americans for Prosperity.

The courts have become politicized, Leo said, and as a result the Supreme Court nomination and confirmation process will begin to look more like a political campaign:

It is inevitable that confirmations are going to look much more like political campaigns than they did before. That means that conservatives need to be prepared to launch very intense and aggressive educational campaigns for the confirmation of their justices.

These activities will include coalition building, earned media, paid media, research, and lobbying, he said.

One big lesson for conservatives, Leo said, is to be ready to educate the public:

It would be nice if we lived in a world where that was not necessary, but if we’re going to have a Supreme Court that acts more like a political institution than a judicial one, this is the natural outgrowth of what is going to happen. And make no mistake, conservatives as well as liberals will engage in those kinds of campaign-related activities.