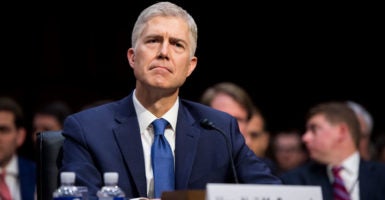 Judge Neil Gorsuch’s former law student who is accusing the Supreme Court nominee of encouraging firms to engage in sexist and possibly illegal hiring practices has close ties to the Democratic Party, The Daily Signal has learned.

Jennifer Sisk, a 2016 graduate of the University of Colorado Law School, wrote a scathing letter to the Senate Judiciary Committee on Sunday. In the letter, Sisk detailed her account of Gorsuch’s telling his law students that “many” women manipulate their employer’s maternity benefits after giving birth.

Multiple media outlets including NBC News, NPR, and Think Progress first reported on this allegation without any mention of Sisk’s ties to Democrats. (Some news outlets, including NPR, updated their stories hours after publication.)

Her work in Udall’s office is documented in the University of Colorado’s Alumni Association Magazine. Her time in the Interior Department during the Obama administration is confirmed on page 83 of the government’s 2012 “Plum Book,” a publication containing data on “over 8,000 federal civil service leadership and support positions.” The book lists Sisk as a “SC appointment,” which stands for “Schedule C Excepted Appointment.”

According to the “Plum Book,” “Because of the confidential or policy-determining nature of Schedule C positions, the incumbents serve at the pleasure of the appointing authority (usually the agency head) and may be removed at any time.”

In her letter to the Judiciary Committee, which is overseeing Gorsuch’s nomination process, Sisk details a back-and-forth conversation between Gorsuch and his students. His comments, she said, “implied that women intentionally manipulate companies and plan to disadvantage their companies starting from the first interview.”

Sisk said in her letter that she shared her experience with the committee because Gorsuch’s “values shared during that class were concerning and should be explored further during his confirmation hearings for the United States Supreme Court.”

In the letter, she did not disclose her work with the Obama administration or Udall.

On Monday, a group of 11 female former law clerks for Gorsuch stepped forward to defend him from Sisk’s allegation.

“We feel compelled … to convey our unanimous experience that Judge Gorsuch has treated us—as he has all his law clerks—with abiding respect during our clerkship years and beyond,” they wrote in a letter to Senate Judiciary Chairman Chuck Grassley, R-Iowa, and California Sen. Dianne Feinstein, the panel’s top Democrat.

Janie Nitze, who worked for the Justice Department under President Barack Obama and also clerked for Supreme Court Justice Sonia Sotomayor, is one of them.

In a statement to The Daily Signal, she said:

I served as a clerk for Judge Neil M. Gorsuch for a year, working day in and day out with him in chambers. Not for one second did I ever feel that he treated me with anything other than the utmost respect—as he did all law clerks. And he has continued to be an invaluable mentor to me over the years, playing a critical role in each of my career advances.

As I noted in an interview weeks before the current allegations surfaced, the judge is usually the first person I go to for career advice. And the first words he has for me when I do are: ‘What can I do to help you?’

The suggestion that he ‘discounts the worth of working females’ is patently absurd, and refuted entirely by my decadelong experience with him and by the experiences of all of his former female law clerks, who collectively sent a letter to the Senate Judiciary Committee on this topic.

Will Hauptman, a current law student at the University of Colorado who says he was in the same class as Sisk, also claims Sisk is misrepresenting the account. According to his LinkedIn profile, Hauptman has clerked for Colorado Attorney General Cynthia Coffman, a Republican.

“Although Judge Gorsuch did discuss some of the topics mentioned in the letter, he did not do so in the manner described,” Hauptman wrote.

“The judge was very matter-of-fact in that we would face difficult decisions; he himself recalled working late nights when he had a young child with whom he wished to share more time,” Hauptman continued. “The seriousness with which the judge asked us to consider these realities reflected his desire to make us aware of them, not any animus against a career or group.”

Confirmation hearings for Gorsuch began Monday, and will continue through Thursday. The Judiciary Committee is expected to vote on Gorsuch’s nomination on April 3.