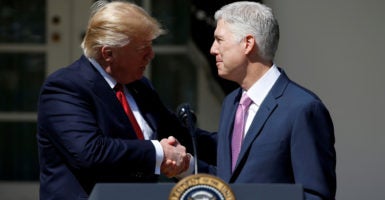 Leonard Leo, who was an outside adviser on judicial nominations to President Donald Trump in 2017, was instrumental in seating Neil Gorsuch, above with Trump, on the Supreme Court. (Photo: Joshua Roberts/Reuters/Newscom)

The man who will be serving as an outside adviser to the President Donald Trump for judicial nominations says that he thinks Justice Anthony Kennedy’s replacement will be like Justice Neil Gorsuch.

“President Trump’s list of potential nominees for this vacancy includes many of the very best judges in America, judges who have records of being fair and independent and applying the Constitution as it was written,” Leonard Leo said in a statement provided to The Daily Signal.

“I expect the nominee to be like Justice Gorsuch, to demonstrate excellence in every respect, and to earn widespread support from the American people, and bipartisan support for confirmation in the Senate,” said Leo, who is on a leave of absence as of Wednesday from his position as executive vice president of the Federalist Society, a conservative legal group.

Leo, who also served an outside adviser on judicial nominations to Trump in 2017, was instrumental in seating Gorsuch on the Supreme Court. Gorsuch told the Senate in a response to question 26 in the Senate’s 68-page questionnaire to Gorsuch that he was first approached about being a Supreme Court nominee by Leo.

Leonard Leo of @FedSoc calls the late Justice Scalia, for whom tonight's dinner is named, a stalwart "defender of freedom and the rule of law." #FedSoc2017 pic.twitter.com/CTmkE9rqwQ

John G. Malcolm, the vice president of The Heritage Foundation’s Institute for Constitutional Government and director of the Edwin Meese III Center for Legal and Judicial Studies, says he has great confidence in Leo.

“I have known Leonard Leo for over 25 years and hold him in the highest regard,” Malcolm, who calls Leo a friend, said in a statement to The Daily Signal.

“I cannot imagine a better person to be advising President Trump and White House Counsel Don McGahn when it comes to selecting from among the outstanding men and women who are on the president’s list of potential nominees,” Malcolm said. “I have no doubt that, with Leonard’s assistance, the president will nominate someone who is independent, fair-minded, and who is prepared to interpret statutes and the Constitution as they were written.”

A replacement for Kennedy’s seat could be filled by October, Carrie Severino, chief counsel and policy director for the Judicial Crisis Network, told The Daily Signal in a phone interview.

“The great news here is President Trump has a wonderful list of two dozen of the top lawyers, top judges in the country that have a record of hearing arguments on both sides fairly, impartially and are some of the brightest rising legal stars in the country.”

“I think the hardest thing here is going to be picking which one to nominate,” she added.

Trump released an updated list  on Nov. 17, 2017, of potential Supreme Court candidates he would consider nominating to the high court.

In 2004, he was the the Bush-Cheney presidential campaign’s Catholic strategist and was appointed by President George W. Bush to serve three terms as chairman on the U.S. Commission on International Religious Freedom.

Leo was born in 1965, graduated from Cornell University with a bachelor’s degree in 1987, and finished his law degree at Cornell Law School in 1989. He currently lives in Northern Virginia and is married to his wife, Sally, and has seven children.

Kennedy announced in a letter Wednesday to Trump that he is retiring, saying that it was an honor to serve on the highest court in the land.

“For a member of the legal profession it is the highest of honors to serve on this court,” Kennedy wrote. “Please permit me by this letter to express my profound gratitude for having had the privilege to seek in each case how best to know, interpret, and defend the Constitution and the laws that must always conform to its mandates and promises.”

Kennedy was nominated by President Ronald Reagan to the Supreme Court in 1987 and sworn in on February 18, 1988.

He was known for being a swing vote on 5-4 decisions and wrote majority opinions in the court’s gay rights cases such as Obergefell v. Hodges, the 2015 case that legalized same-sex marriage.

On Wednesday, several conservatives weighed in on Kennedy’s legacy.

Michael Farris, president, CEO, and general counsel of Alliance Defending Freedom, thanked Kennedy for his service on many issues but said that Kennedy departed from faithfully interpreting the Constitution in ruling to legalize same-sex marriage.

“We respectfully disagree with those decisions where Justice Kennedy created ‘rights’ not found in or intended by the United States Constitution,” Farris said, adding:

He deeply disappointed many Americans with his constitutional jurisprudence favoring abortion and same-sex marriage. But we also praise Justice Kennedy’s insight and forceful celebration of First Amendment freedoms, his sensitivity to the danger of authoritarian government, and his refreshing desire to preserve and teach the necessity of freedom of speech to future generations.

J. Christian Adams, president of the Public Interest Legal Foundation and a former Justice Department lawyer, thanked Kennedy for his service and said that Trump has a significant opportunity to nominate a candidate who is committed to upholding the Constitution.

“I’m thankful for Justice Kennedy’s decades of service to this nation,” Adams said. “He was the last link on the Supreme Court to the great revitalization of American principles by Ronald Reagan. President Trump should continue his demonstrated commitment to advancing judicial nominees with a strong commitment to the Constitution and the rule of law.”

Heritage’s Malcolm says Kennedy made a significant impact on the Supreme Court.

“Over his 30 years on the bench, Justice Anthony Kennedy certainly left his mark on the law. It was not always easy to pigeonhole Justice Kennedy’s jurisprudence, except that it was seemingly marked by an occasional breathtaking inconsistency,” Malcolm said, adding:

Hailed by some as ‘King Kennedy’ there was no question that, particularly in recent years, he was usually the deciding vote in close and controversial cases. While he sided with the conservative justices in many of these cases involving religious liberty, civil rights, voting rights, campaign finance laws, and the Second Amendment, he cast the deciding vote in several seminal cases restricting capital punishment and advancing socially liberal causes.

While he had a complicated relationship with conservatives, the Heritage Foundation thanks Justice Kennedy for his many years of dedicated service to our country and for giving President Trump another opportunity to appoint a committed constitutionalist justice to the Supreme Court.