Sen. Cruz: Impeachment Is a ‘1-Sided Show Trial,’ ‘Not Driven by Facts’ 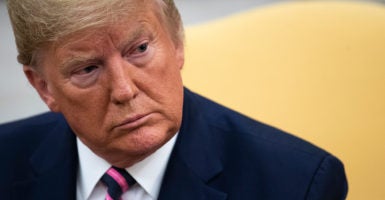 House Democrats have yet to file articles of impeachment in the Senate against President Donald Trump. (Photo: Drew Angerer/Getty Images)

President Donald Trump is only the third president to be impeached because impeachment is a rarely used tool that the Founders intended to be a serious and fair process. Sen. Ted Cruz, R-Texas, says he is concerned that Trump hasn’t gotten the due process he deserves. I spoke with him about the impeachment process and how it will likely play out in the Senate. Listen to the podcast or read a lightly edited transcript below.

Rachel del Guidice: We are joined today on The Daily Signal Podcast by Sen. Ted Cruz of Texas. Senator Cruz, thank you so much for being with us today.

del Guidice: Even though it’s a new year, it’s no secret that impeachment will continue to overtake the news and even Congress. Even though this is something we’ve been hearing about for actually four years now, what should Americans know about this impeachment that maybe they’re not hearing on mainstream media?

Cruz: What we saw in the House of Representatives was really a sad display. It was a one-sided show trial. It was the culmination of three years of hatred and partisan venom.

Now look, bribery, obstruction of justice, extortion, those are serious crimes. Then, after they actually heard evidence, the evidence didn’t back up any of that. Everything they alleged, they got to and said, “Well, we can’t.” And there’s a reason. All of those are federal crimes. Federal crimes have things called elements, elements of the crime.

The Democrats’ problem was everything they’d promised collapsed, but they hated the president and wanted to impeach him anyway. They voted on articles of impeachment that on their face don’t meet the constitutional standards.

The Constitution specifies what has to be proven for impeachment of a president, that is treason, bribery, or other high crimes and misdemeanors. On its face, the House articles of impeachment don’t meet that.

del Guidice: He wasn’t able to do that in the House.

Cruz: He wasn’t able to do that.

We’re going to respect due process. We’re going to give the president an opportunity to present a full defense on the merits, on the facts. And then at the end of that process, this entire charade is going to be thrown out.

del Guidice: You were just recently at The Heritage Foundation and you said something really interesting that a lot of people aren’t talking about. You said that this impeachment cycle that we’re seeing with President Trump, it’s now being used as a political tactic and really nothing else. Can you talk to us about that?

Cruz: Sure. This is something actually the Framers of our Constitution … worried about a great deal. They didn’t want to see impeachment just used as a political weapon.

At Heritage I talked at considerable length [about] some of the constitutional history of where the language of treason, bribery, or other high crimes and misdemeanors came from. There were a couple of early iterations. Then, going into the Convention, the language for impeachment of the president just said treason or bribery.

George Mason, one of the most well-respected of the Framers, stood up and he made a motion to add the word “maladministration” so that the phrase would have read “treason, bribery, or maladministration.” James Madison, widely recognized as the Father of the Constitution, stood up and objected to Mason’s suggestion. He said, “This is a bad idea because maladministration is such a general, such a broad and capacious term.”

del Guidice: It could mean anything.

Madison came back and said, “How about instead of maladministration, let’s add ‘other high crimes and misdemeanors.'” That’s what they ended up doing.

The consequence of the Democrats doing this [is], if this is the standard for the House of Representatives, every president from now to eternity will be impeached any time the House is of an opposing party.

The media will never point this out. Barack Obama was president for eight years. I disagreed with Barack Obama profoundly. I think he advocated, I think he implemented policies that were enormously damaging to this country, that hurt Americans, that hurt Texans.

Yet, despite my very strong disagreements with Obama, I didn’t advocate impeaching Obama. I wasn’t out there arguing we should impeach Obama. Why? Because if you disagree with someone on policy or politics, the Constitution has a remedy for that. You go and win at the ballot box. You go make the case to the American people that the policies this guy is implementing are bad policy.

They can’t make the case on policy. They’re looking at it and saying, “Well, if we actually have to argue on substance, we lose, so let’s impeach him.” That’s an abuse of the Constitution. Sadly, it is where today’s extreme, radical Democratic Party is.

del Guidice: You’ve seen arguments on Twitter and even mainstream news outlets. I saw an article last week saying that, “Oh, this Trump impeachment is similar to the Clinton impeachment.” They’re two very different situations. Can you detail that real quickly for us?

The House Democrats haven’t alleged that, and it’s interesting if you contrast. There are two articles that the House Democrats voted on. No. 1, where they were threatening bribery, extortion, they didn’t impeach on any of that. They made something up called abuse of power and their argument is they don’t have to allege any violation of criminal law. They don’t have to allege any federal law whatsoever was violated. That they don’t have to argue, in their view of the world, that Donald Trump had a speeding ticket. They just disagree with his foreign policy and how he implements it. That’s Article 1.

They backed away, and here’s their argument. Their argument is because administration officials claimed various forms of privilege, primarily executive privilege, that the mere act of claiming a legal privilege is obstruction of Congress, and it is a high crime or misdemeanor that is impeachable. That is a ludicrous, laughable standard.

If that were a standard, and this is not hyperbole, every single one of the 45 presidents we’ve had would have committed high crimes and misdemeanors that can be impeached. Going back to George Washington, every president has asserted executive privilege and other privileges.

Let’s dive down a little bit more because I want to show just how ridiculous this is. Let’s take the case of John Bolton.

John Bolton was the national security adviser to President Trump for a year and a half. House Democrats wanted John Bolton to testify in the House. John Bolton did something I think very clever and very wise. Through his lawyer, he went to federal district court in D.C. and he went to the judge and he said, “Judge, I’ve got a demand from the House of Representatives to testify, and I’ve been instructed by the White House not to testify, based on executive privilege.” And John Bolton said—

del Guidice: What do I do?

Cruz: “Judge, you tell me what to do. I’ll follow the law. I’ve got two conflicting legal obligations here, so I’m going to you, judge, asking for what is the right answer under the law.”

You know what House Democrats did?

del Guidice: What did they do?

“The fact that you went to court to ask for an answer,” they said, “that’s obstruction, going to court.”

Cruz: Contrast that say to the Nixon case. Nixon, there was a grand jury subpoena for the White House tapes. Remember, Richard Nixon had a secret tape-recording device in the Oval Office, very stupid, by the way, bad, bad idea, but he did.

Grand jury issued a subpoena. That was litigated all the way to the U.S. Supreme Court. [The] U.S. Supreme Court issued an order to the Nixon White House, “Handover those tapes.” Nixon resigned, I think, two days later.

That’s actually how these issues are typically resolved. If the House wants to get testimony, they could issue a subpoena. They can go litigate it. They can take it to the court. They can take it to the Supreme Court. Their position is, “Nope, we’re not going to do any of that. Any president who asserts any privilege, that is “obstruction of Congress and impeachable.” It is difficult to find a more ludicrous argument and support of impeachment.

del Guidice: I think you’re right that we’re going to keep seeing this unless we reel this in somehow. Sen. Cruz, thank you so much for joining us on The Daily Signal Podcast.

Cruz: Always a pleasure, thank you.

del Guidice: Thank you so much.