‘Catch and Release Is Over’: Border Apprehensions Drop for Sixth Month in a Row 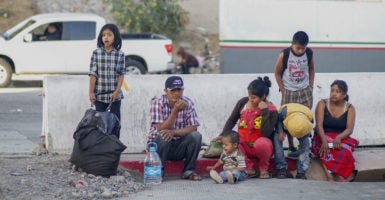 Customs and Border Protection enforcement actions totaled 42,649 in the month of November, according to data obtained by The Daily Caller News Foundation. The data—which is a combination of the 33,510 arrests and 9,139 inadmissible aliens at the border for that month—show a 6% decline from October.

The Department of Homeland Security celebrated the latest numbers, and pointed to policies undertaken by the Trump administration as the root cause.

“The president’s strategy to address the historic flood of Central American family units illegally crossing the border has worked. And, thanks to the policies President Trump has implemented across the board, catch and release is over,” a Department of Homeland Security spokesperson said in a statement obtained by The Daily Caller News Foundation.

The latest apprehension numbers indicate the swiftly waning crisis at the U.S.-Mexico border, which was once overwhelmed with waves of Central American family units and other illegal aliens on a daily basis.

The declining border arrests follow a multitude of initiatives pushed by the White House since President Donald Trump entered office.

Remain in Mexico, otherwise known as the Migrant Protection Protocols, requires most Central American migrants to wait in Mexico while their asylum claims are processed in the U.S. immigration court system—eliminating a major incentive for illegal immigration by barring them from living in the interior of the country while their cases are adjudicated by a judge.

Metering, which mandates that only a limited number of migrants can cross the southern border to lodge an asylum claim, has also erased the idea among many would-be migrants that they can immediately enter the U.S. and enjoy asylum protections. Most recently, the Trump administration has also begun implementing its asylum agreements with Central American governments, sending migrants back to the region if they did not first seek protected status there.