These Law-Abiding People Used Guns to Defend Themselves in October 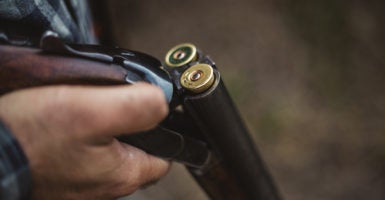 "Far from being a dangerous relic of the past, the right of law-abiding citizens to keep and bear arms remains an invaluable part of the ability of innocent people to defend their lives, rights, and liberties," writes Amy Swearer. (Photo: Obradovic/Getty Images)

Far too often, those who disagree with supporters of the Second Amendment about firearm-related policies resort to assertions that we simply care more about our guns than about the lives of innocent people, and that the right to keep and bear arms has little beneficial purpose in modern America.

Despite claims by many gun control advocates that firearms are rarely used in self-defense, the Centers for Disease Control and Prevention noted in a 2013 report that almost all major studies on defensive gun uses have concluded that Americans use their firearms in self-defense between 500,000 and 3 million times every year.

These Americans also have names, faces, and stories. Their lives and livelihoods should be an important part of the discussion surrounding national firearms policy, especially when so many politicians currently advocate severely restricting the ability of law-abiding citizens to keep and bear arms.

Since the beginning of this year, we have shone a spotlight each month on some of the best examples of law-abiding citizens defending themselves or others with their firearms. (See articles from past months here: January, February, March, April, May, June, July, August, and September.)

October was no different, with a number of standout moments highlighting the people for whom the Second Amendment right to keep and bear arms was much more than an outdated relic of history:

The reality is that the right to keep and bear arms is fundamentally not about advocating violence, nor are its supporters motivated by a callous disregard for life.

Quite the opposite, the right stands as a meaningful safeguard for everyone facing violent threats to their rights and liberties. It’s for young, pregnant women whose families are threatened by home invaders. It’s for storeowners terrorized by criminal thugs.

It’s for severely handicapped apartment tenants with no one to protect them, homeowners with loved ones asleep upstairs, and 6-foot-4-inch professional athletes praying the police arrive in time.

When we defend the Second Amendment, it is not because we are apathetic to the suffering of innocent people. It is because we would prefer the innocent to have a meaningful defense against anyone who would cause their suffering in the first place.

Far from being a dangerous relic of the past, the right of law-abiding citizens to keep and bear arms remains an invaluable part of the ability of innocent people to defend their lives, rights, and liberties.