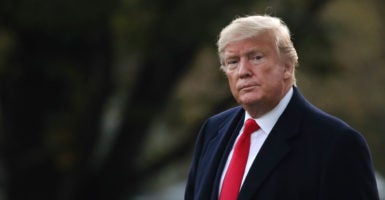 President Donald Trump leaves the Oval Office and walks toward Marine One on the South Lawn of the White House Nov. 14, 2019, in Washington, D.C. (Photo: Drew Angerer/Getty Images)

One of the most durable conspiracy theories of our times finds Vladimir Putin recruiting a billionaire media personality named Donald Trump to the U.S. presidency.

In some iterations of the tale, Trump is willingly serving his Kremlin comrades; in others, he is merely the victim of kompromat. In every version, he is an asset of a hostile government.

Putin, who is apparently blessed with seer-like abilities, knew in the late 1970s that Trump, whose political positions would wildly fluctuate over 40 years, was presidential material, and that now, after decades of patiently waiting, the duo’s nefarious plan to cut taxes and place originalists onto the federal bench has finally come to fruition.

In a sprawling July 2018 New York piece headlined, “Will Trump Be Meeting with His Counterpart—Or His Handler? A plausible theory of mind-boggling collusion,” Jonathan Chait offered a fully realized rendering of Trump’s potential sedition. Cobbling together every interaction the real estate developer ever had with Russians, Chait posits that Trump might have become a Kremlin asset in 1987 when he visited Moscow.

Recently, CNBC’s John Harwood resuscitated this conspiracy, claiming that while “conservative media dismissed as ridiculous the idea that Russia might have cultivated Trump for decades, Fiona Hill, a leading US govt Russia expert, now makes clear it’s not ridiculous in the slightest.”

The quote Harwood highlights from Hill’s Oct. 14 congressional testimony specifically points to Putin’s role in exclusively “targeting” American businessmen in the late 1970s, not “for decades.”

In an adjacent quote, in fact, Hill argues that everyone was targeted by Russians for decades—not that Trump was “cultivated,” as Harwood asserts—and that it was a mistake to focus only on meddling in relation to the president rather than on meddling in a broader perspective.

Here is Hill: “I think that there’s a good chance that was the case and that, you know—and, again, compromising material was being collected on a whole range of individuals. And it was most definitely being collected on Secretary, former First Lady and Senator Clinton as well.”

The context of her statements are a far cry from, “Russia might have cultivated Trump for decades.” Of course, no one can dispute that Russians have been digging up dirt on prominent American citizens forever, but the word “cultivate” or “handler”—or any other term that intimates that the president is working for Russians—does not appear, even hypothetically, in any form in the transcript of Hill’s testimony.

Also, does anyone really believe that Harwood types in the media would be grappling with the “cloud” that Hill, “a leading US govt Russia expert,” now makes clear would be hovering over Hillary Clinton’s head as well, if she had won?

Even if Harwood had accurately conveyed Hill’s claims, we’ve now had three years of intense journalistic effort, wide-ranging congressional investigations, and an independent inquiry that have been unable to turn up a single instance in which Trump was compromised or colluded with Russians.

Anyone paying attention during the 2016 campaign was already well acquainted with the president’s views on Russia: Trump isn’t going to bash Putin because Trump respects Putin, and he strives to build friendly relations with Russia.

I’m sorry to say, Trump’s policies toward Putin differ very little from those of his predecessors—though he may well be tougher.

It was the Obama administration, according to Bill Browder, one of the driving forces behind the Magnitsky Act, who spent two years trying to kill the act before acquiescing to bipartisan pressure. It was Obama, not Trump, who capitulated to Russia and gave in on accession to the World Trade Organization.

It was former Vice President Joe Biden, not Vice President Mike Pence, who in 2009 told Medvedev that “the most important item on our agenda” was to restore Russia-U.S. relations after eight years of the Bush administration’s antagonism.

It was also Obama who abandoned the Syrian “red line,” leaving Russia’s allies to massacre thousands of civilians in a broader effort to appease the Iranians. Just because the 44th president habitually aligned the United States with the Islamic regime in Iran doesn’t mean he was a foreign Muslim interloper.

Then again, the Manchurian Candidate conspiracy theory is much like birtherism. Too many conservatives rationalized their anger over politics by convincing themselves that Obama wasn’t only a dangerous ideological adversary but a seditious and illegitimate one as well. (One of the people rightly pilloried for doing this was Trump.) The only difference is that Democrats have mainstreamed this kind of destructive paranoia.