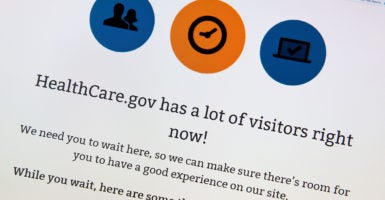 HealthCare.gov indicates that the site is too busy for the amount of traffic, March 13, 2019. (Photo: Karen Bleier/AFP/Getty Images) 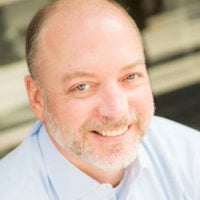 Joel White is the executive director of the Clear Choices Campaign, a health care cost-transparency initiative of the Council for Affordable Health Coverage, at which he also serves as president.

One lesson learned from the disastrous 2013 launch of the Obamacare website, HealthCare.gov, is that the federal government isn’t much of a tech-savvy e-commerce innovator.

Even so, six years later, the feds are still running and upgrading HealthCare.gov and its Medicare sister site, Medicare.gov.

Will the Trump administration apply the lessons learned and get out of the e-commerce business? Are the current investments one-time upgrades that indicate a path to more private enrollment options?

Centers for Medicare and Medicaid Services Administrator Seema Verma recently indicated that her agency has no designs to take over the online Medicare enrollment process, and that although recent changes to the so-called Medicare Plan Finder are meant to update the site’s consumer experience, the Trump administration’s goal is not to compete with the private sector.

In a recent meeting with the board of the Council for Affordable Health Coverage, which I chair, Verma discussed the Medicare annual enrollment period, which began on Oct. 15, as well as the administration’s broader strategic health care initiatives.

More recently, Randy Pate, the deputy administrator of the Centers for Medicare and Medicaid Services and director of the Center for Consumer Information and Insurance Oversight, discussed the upcoming Obamacare open-enrollment period that begins Nov. 1 and plans to give consumers more options in how and where they obtain coverage.

Both meetings were encouraging, as administration officials signaled that one-time investments in public shopping and enrollment tools would soon give way to private sector-led options.

It’s no shock to most Americans that Uncle Sam isn’t exactly an ace when it comes to e-commerce. The federal government has historically done a terrible job presenting upfront, need-to-know information to consumers who are comparison-shopping or seeking to enroll in health coverage.

Moreover, a reliance on government-run enrollment tools would appear to violate the spirit, if not the letter, of long-standing policy to not compete with the private sector (OMB Circular A-76).

Previous research has suggested that few Medicare beneficiaries sign up for coverage online due to serious design and functional flaws with the Medicare Plan Finder.

Suboptimal plan choice by beneficiaries is also widespread in Medicare markets. Too many Medicare beneficiaries don’t understand their options or how to use the tools for comparing and choosing among the various plans available to them.

When these tools are used, the information is often presented in confusing Washington jargon, making it difficult to understand.

Most Americans would intuit that the government will never be able to match the innovation of the private sector.

In her recent comments, Verma embraced that reality, explaining that her agency’s decision to invest a one-time sum of taxpayer money to upgrade the Medicare Plan Finder, giving the site its first overhaul in more than a decade, is not meant to compete with or replace the private sector.

“The government is just not good at this,” she said, expressing the expectation that the private sector would continue to innovate new ways to help Medicare beneficiaries efficiently learn about and shop for their best coverage option.

So, what did the investment buy?

The website looks better, but the functionality is still flawed. Premiums are displayed prominently, but the total cost of care (including out-of-pocket costs at the pharmacy) remain buried in detail. That will produce unwelcome surprises for seniors—and perhaps politicians—next year.

Frankly, beneficiaries would probably be better off if the Centers for Medicare and Medicaid Services decided to simply provide basic information on different options, and direct people to private websites where they might enroll in the coverage that meets their needs based on conversations with experts in the field.

Pate has the unenviable Trump administration job of attempting to run the inherently flawed Obamacare program as smoothly as possible, and wherever possible, injecting conservative and market-oriented principles into its operations.

It’s no small feat that, under Pate’s watch, average premiums have been falling, while consumer choices have increased.

Just two years ago, the federal government was using a system called the “double redirect,” where the government required private exchanges to send their consumers to HealthCare.gov to apply for subsidies and then redirect them back to the source website to complete the transaction.

This double redirect lost 70% to 90% of consumers who found the process too burdensome to close the deal. That’s one reason private-sector online shopping tools such as Amazon or Expedia stopped using double redirects years ago.

Thanks to reforms led by Pate and his team, direct enrollment through private-sector websites will be available for all consumers in every state that has not outlawed their use.

With Obamacare’s open-enrollment season fast approaching, we expect at least five private websites to be available to consumers to meet their needs.

But perhaps the most encouraging evidence is this administration’s approach to advertising. Under President Barack Obama, the government spent hundreds of millions of dollars advertising HealthCare.gov with highly inefficient results.

On Wednesday, Verma called into question the wisdom of that spending in her remarks before a subcommittee of the House Energy and Commerce Committee.

Instead, under this administration, the Centers for Medicare and Medicaid Services plans to spend a small fraction of that amount—some $8 million to $10 million on advertising the Medicare annual enrollment period.

The good news is that millions of consumers will have access to upgraded websites to make these deeply important health coverage choices. But we must remain vigilant to ensure the government isn’t competing with the private sector.

Government bureaucracies simply do not keep up with market demand and consumer preferences and trends. No amount of tinkering with the Medicare Plan Finder or other government website will change the incentives at play.

The Centers for Medicare and Medicaid Services should fill the legitimate public role of providing information on all plans and options available under Medicare and in Obamacare, but it should permanently end its foray into e-commerce by eventually phasing out the Medicare Plan Finder and HealthCare.gov’s enrollment functions.