At the White House, Victims of Communism Share Stories About Finding Freedom in America 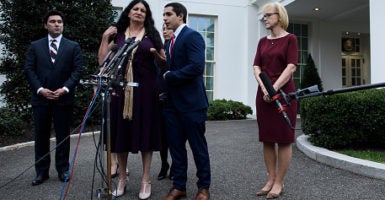 Sirley Avila Leon, in purple, and other victims of communist oppression speak to reporters Thursday after meeting with President Donald Trump at the White House in recognition of National Day for the Victims of Communism. (Photo: Brendan Smialowski/ AFP/Getty Images)

Before defecting to the United States, Grace Jo and her mother tried to escape from North Korea to another communist country, China.

But Chinese authorities sent them back to the nation where Jo’s brothers had been starved to death and her father had been killed by the regime in Pyongyang.

“When I witnessed that, I felt and I believed that my country is not giving us any freedom, and there is no human rights at all,” Jo, now vice president of North Korean Refugees in the USA, said Thursday at the White House after a meeting with President Donald Trump.

Trump spoke with five survivors of communist regimes in the Roosevelt Room of the White House, two years after he became the first president to recognize Nov. 7 as National Day for the Victims of Communism.

Communism is an ideology responsible for the deaths of an estimated 100 million in the 20th century at the hands of about 40 governments across Europe, Asia, and Latin America.

Thursday marked the 102nd anniversary of the Bolshevik Revolution in Russia, the first country where communists seized control.

“After I came to America, I learned how we can live as a human being, and I learned—Wow!—this freedom is amazing,” Jo told reporters, adding:

We all are equal, and we are God’s creation. We deserve to be treated as human beings, and I would like to ask the United States to enforce the sanctions against the North Korean regime, because that is the only way North Korea and their regime will change their policy.

Others at the gathering included Aldona Wos, who lived in Poland when it was under communist rule and who now serves as vice chairman of the President’s Commission on White House Fellowships. Wos previously served as U.S. ambassador to Estonia under President George W. Bush.

“I want to express our ‘thank you’ to President Trump for honoring the memory of 100 million people who died and were persecuted under the communist regimes, under the failed ideology of communism,” Wos said.

“My entire family, as well as millions of other people of Poland, suffered tremendously under communism,” she added. “I am extremely grateful and blessed to be an American and live in the United States, in a country that offers us the opportunity to live in dignity, in freedom, and to fulfill our full potential.”

Sirley Avila Leon of Cuba told reporters that she once strongly supported the communism of that nation’s Castro regime, worked in municipal government, and even had a son serving in the military. But, she said, the Cuban government targeted her when she began to question the regime’s bureaucracy, corruption, and brutality.

Also in attendance was Nguyen Ngoc Nhu Quynh, known as the blogger and writer “Mother Mushroom,” a human rights activist for the people of Vietnam. She was a political prisoner in Vietnam for two years before being sent into exile in the U.S. in October 2018 after then-Defense Secretary James Mattis visited Vietnam.

Daniel Di Martino came to the United States from Venezuela in 2016 to attend Purdue University in Indianapolis. He said his was a middle-class family before Venezuela’s socialist government seized their gas station.

“When I left, we were making $2 per day because of hyperinflation and price controls and nationalization,” Di Martino told reporters. “So, it is very important that Americans know that socialism doesn’t work. It doesn’t work because it goes against human nature, and against our incentives to work for our own benefits, for our families benefit.”

“I want to keep America a country that is free and a country where everybody is able to prosper,” he said.