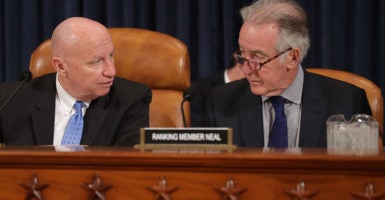 Two congressman are pushing proposals to change Social Security benefits for workers who retired with a pension from a government job but were covered only partially by Social Security during their careers.

The current approach of the two lawmakers speaks volumes about the political difficulties associated with making even the tiniest, most commonsense reforms to this decades-old program.

The so-called windfall elimination provision—often referred to as the WEP—adjusts the benefits of workers who held jobs outside the Social Security system as well as jobs that were covered by Social Security.

The provision primarily affects state or local government employees and any federal workers hired prior to 1984. About 2 million people, or 3% of Social Security beneficiaries, are subject to the provision.

Congress adopted it because Social Security’s benefit formula is progressive, which means the program replaces a higher percentage of preretirement wages for lower-income workers than for higher earners. Before the windfall elimination provision was implemented, certain workers would receive an unfair “windfall” in the form of higher benefits.

This is because the Social Security benefit formula is based on average earnings over 35 years, but someone who spent most of  his or her life working in a job not subject to Social Security taxes would have a bunch of zero-earnings years bringing down their average and making them appear to have lower earnings than they actually did.

Congress adopted the windfall elimination provision to help ensure the program’s progressive intent. The problem is that in 1983, when this provision was enacted, Social Security lacked the data necessary to make a fair adjustment. Instead, Congress adopted a simplified method that treated some beneficiaries better than others.

Today, thanks to more complete data about earnings, including from work not subject to Social Security taxes, the agency can calculate the proper benefit adjustment using a proportional, or pro-rated, formula that improves accuracy and fairness.

President Barack Obama’s 2017 budget included such a proposal.  A bipartisan duo in the House, Reps. Kevin Brady, R-Texas, and Richard Neal, D-Mass., had put forth a plan in 2015. A version also was included in the comprehensive Social Security Reform Act of 2016, from then-Rep. Sam Johnson, R-Texas.

Greater accuracy and fairness sounds great. So why has this policy not yet been adopted?

Simply switching to the new formula would have resulted in mostly winners and a few losers. In particular, some people who are not affected by the current windfall elimination provision would have experienced small benefit reductions under the new approach.

Despite most people being better off under a proportional formula, when it comes to some entitlement programs—such as Social Security—it seems that progress stalls if anybody’s benefits would be reduced even in the slightest.

Fast forward to 2019, and instead of continuing to promote one sensible, bipartisan approach, Brady and Neal have introduced separate proposals. Both would adopt a proportional formula to improve accuracy and fairness, as their earlier bipartisan version proposed.

Unfortunately, both proposals move away from immediate adoption (starting in 2022) for anyone who might experience a benefit reduction and would increase benefits through a so-called rebate payment to those currently affected by the windfall elimination provision.

Under the Brady proposal (HR 3934), beneficiaries who become eligible for Social Security between 2022 and 2060 would receive the higher benefit of the current provision or the proportional formula.

The proposals would increase the 10-year costs of Social Security, by $23.1 billion (Brady) and $34.3 billion (Neal), respectively, and have a small, negligible impact over the 75-year horizon.

Policy and political developments on this niche issue within the broader Social Security program demonstrate that we’ve moved further away from being able to pursue effective, commonsense reforms to make Social Security work better, rather than closer.

That’s deeply troubling as Social Security’s deficits are growing deeper every year and its trust fund, holding Treasury bonds, will be depleted in 2035 and possibly sooner, should the economy take a turn for the worse.

Congress should fix the windfall elimination provision by adopting a proportional formula as part of a broader Social Security reform package that protects the most vulnerable beneficiaries, prevents undue tax and debt burdens on younger generations, and returns control and ownership over retirement savings to individuals.

Just as Congress should not eliminate the windfall elimination provision because doing so would give excess benefits to some workers, Congress also should not pander to affected beneficiaries’ desire for larger benefits by increasing their payout for decades, or permanently.