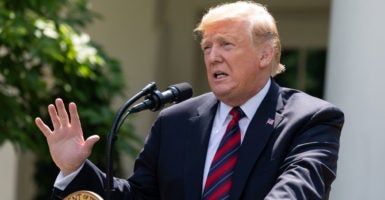 "There is no 'cover-up' by President Trump going on, as wrongly claimed by House Speaker Nancy Pelosi. Nor are Cabinet officials engaged in a cover-up," Hans von Spakovsky writes. (Photo: NurPhoto /Contributor/Getty Images)

Some congressional Democrats want nothing more than to hand Attorney General William Barr and Treasury Secretary Steven Mnuchin (among others) a “GO DIRECTLY TO JAIL” card like the ones you find in the game of Monopoly. But calls to lock them up are unjustified and uncalled for.

What would jailing two Cabinet members be based on?

The attorney general’s handling of the report by special counsel Robert Mueller has been in accord with federal law, the federal rules of criminal procedure, and Justice Department regulations.

There is no “cover-up” by President Donald Trump going on, as wrongly claimed by House Speaker Nancy Pelosi, D-Calif. Nor are Cabinet officials engaged in a cover-up.

Congressional leaders have all but 2% of the Mueller report, which was redacted to comply with grand jury secrecy rules and protect material that could threaten national security if disclosed.

And the Justice Department has even agreed to give the House Intelligence Committee highly confidential counterintelligence and foreign intelligence materials from the Mueller investigation.

Mnuchin’s refusal to violate the right of a taxpayer (Trump) to the privacy and confidentiality of his tax returns by handing them over to a congressional committee is also based on a credible and legitimate legal claim.

Numerous federal courts, including the U.S. Supreme Court, have held that the oversight and investigative authority of Congress is limited to inquiries that have a legitimate legislative purpose.

There is “no congressional power to expose for the sake of exposure,” said the Supreme Court in 1957 in Watkins v. U.S., a case involving a subpoena issued to a target of the House Un-American Activities Committee.

Mnuchin has told Congress that its demand for the Trump tax returns serves no legislative purpose.

Whether that is a valid claim in this particular case is a question that only the courts can decide, as they have in past instances where the targets of congressional investigations have claimed that Congress has overstepped its constitutional authority.

Some Democratic members of Congress are also angry that the White House refuses to allow the president’s former White House counsel, Don McGahn, to testify about the Mueller report. Reps. Joaquin Castro, D-Texas, and Diana DeGette, Colo., claim that this is grounds for impeaching the president.

But as pointed out in a May 20, 2019, memorandum by the Office of Legal Counsel at the Justice Department, under the separation of powers doctrine of the Constitution, Congress has no authority to “compel the president’s senior advisers to testify about their official duties.”

Janet Reno, who served as attorney general during the Clinton administration, said in 1999 that “subjecting a senior presidential advisor to the congressional subpoena power would be akin to requiring the President himself to appear before Congress,” something everyone acknowledges that Congress has no authority to do.

Congress can’t demand the president’s testimony “in a congressional committee room” any more “than the President may command Members of Congress to appear at the White House,” said former Assistant Attorney General Ted Olson in 1982 in a similar Office of Legal Counsel opinion.

It has long been recognized that a president can assert executive privilege to protect his advisers from congressional demands for testimony, information, and documents.

The “President and his advisors are absolutely immune from testimonial compulsion by a Congressional committee,” said another Justice Department opinion in 1977, during the Jimmy Carter presidency. This opinion was reaffirmed by the Obama Justice Department in 2014.

Based on this privilege doctrine, the Obama administration refused to allow David Simas, an assistant to the president and director of the Office of Political Strategy Outreach in the White House, to testify in 2014.

No Democrats called for President Barack Obama’s impeachment for that action. In fact, Rep. Elijah Cummings, D-Md.,—who today is the chair of the House Oversight Committee—criticized the subpoena, claiming that Republicans had not set forth an adequate justification for issuing it.

“We do not simply haul in one of the president’s top advisers at will,” Cummings said in 2014.

Yet Cummings has now subpoenaed Trump’s accounting firm for financial records—a subpoena that the president’s lawyers are fighting in court, so far unsuccessfully. Two separate federal judges have refused to block the subpoenas.

So what happens if the House of Representatives votes to hold an executive branch official in contempt for refusing to respond to a subpoena?

Under federal law (2 U.S.C. §194), the speaker of the House can certify the matter to the “appropriate United States Attorney, whose duty it shall be to bring the matter before the grand jury for its action.” An individual can be punished by a criminal fine of up to $1,000 and spend up to a year in jail.

In other words, U.S. attorneys have the power to decide whether to present the contempt citation to a grand jury. The Justice Department exercised that discretion when the House held Obama administration Attorney General Eric Holder and Internal Revenue Service official Lois Lerner in contempt.

In both instances, the Justice Department refused to enforce the contempt citations.

There seems little doubt that those in the current Justice Department would refuse to enforce any contempt citation against Barr, Mnuchin, or McGahn.

Alternatively, the House can file a civil action in federal court to enforce the contempt citation and ask a judge to order an individual to comply.

Some members of Congress are saying that the House should bypass the Justice Department and the courts entirely and use its inherent contempt authority to jail Barr and other Trump administration officials.

Pelosi says the House has “a jail in the basement of the Capitol,” which led Barr to jokingly approach Pelosi at an event honoring slain law enforcement officers and ask her if she brought her handcuffs.

The inherent contempt authority that critics are referring to, as a 2017 Congressional Research Service report explains, is the “constitutional authority to detain and imprison” an individual inside the Capitol until he or she complies with congressional demands.

This is considered a “dormant” power because Congress hasn’t exercised it since 1935 and only in a very small number of cases before then.

What is interesting in relation to the tax return and financial records controversy is that the U.S. Supreme Court held in 1881 in Kilbourn v. Thompson that Congress could not enforce a contempt citation against an individual who was arrested and detained by the sergeant-at-arms of the House when its investigation was undertaken to pry into the personal finances of that individual.

The high court said Congress does not “possess the general power of making inquiry into the private affairs of the citizen.”

How the courts—and potentially the Supreme Court—will ultimately decide these issues, if that is the avenue the House takes, remains to be seen.

But there would obviously be very negative political consequences if, as Barr joked, the House actually tries to arrest and detain in the U.S. Capitol building the attorney general, the secretary of the Treasury, or McGahn.

There seems little doubt that the public would see that as an extremely partisan, unjustified, and unfair act by the party that controls the House.

The question is, will House Democrats realize that?