Some Are More Equal Than Others in Socialist Venezuela 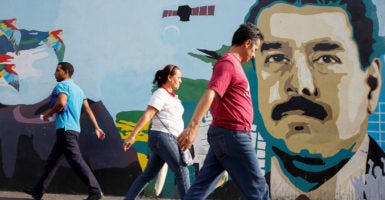 In George Orwell’s book, “Animal Farm”—essentially the story of the Bolshevik Revolution in Russia, told through farm animals—there is an incredible moment where the animals, who suffer under the system of communism that they’ve created, come to a horrible realization that everything has gone wrong.

At a lavish dinner party with the humans, the animals’ leaders, the pigs—who promised them a life of plenty and perfect equality—morph into the tyrants the animals thought they had overthrown.

It is a perfect tale about absolute power and corruption—the end stage of communism.

And so it is in Venezuela, where a socialist regime once praised by The New York Times as both successful and sustainable, is teetering on the brink of collapse while its leaders are dining at fine restaurants.

A video recently surfaced of Venezuelan President Nicolas Maduro, once democratically elected but now clinging to power through brute force and fraud elections, eating at one of the most expensive restaurants in the world.

In the video, celebrity chef Nusret Gokce, who goes by the name Salt Bae, carves meat for Maduro and his wife in a stylized way while they dine at Salt Bae’s world-renowned Turkish steakhouse, Nusr-Et.

After deleting the Maduro videos from his Instagram account, @nusr_ett has now also scrubbed evidence of Maduro tucking into his famous steaks from Twitter. Here's the footage if you haven't seen it yet: pic.twitter.com/BP1DIwi03q

There was immediate blowback on social media.

Maduro wants to talk about visit to #China but the suffering people of #Venezuela want to talk about his lavish dinner at Salt Bae's restaurant. He has starved & oppressed 2.3 million people out of the country & another 1 million possible before years end https://t.co/VUTSuTCYAe

Why the outrage over Maduro's lavish steak dinner Turkey?

Back home, Maya Bello has lost 70 pounds in three years. Her youngest son was severely malnourished until a charity provided food alternatives. I'll have their story this pm on @WPLGLocal10. pic.twitter.com/nlh9l4S0QR

This is what happens under #socialism: the dictator and his cronies (who produce nothing) consume everything while the people starve. Shame on you, @nusr_ett. You're a disgrace. #Venezuela #saltbae pic.twitter.com/wrKHkVR7Wz

As many point out, what makes this so galling is that in Maduro’s country, once one of the most prosperous in South America, the average Venezuelan starves in abject, state-created poverty.

The Miami Herald highlighted some other shocking numbers that have led the Venezuelan people to desperation.

“Asked about their weekly eating habits, 30.5 percent [of Venezuelans] said they often ate only once a day and 28.5 percent reported that they ate ‘nothing or close to nothing’ at least one day a week. In all, 78.6 percent reported trouble keeping themselves fed,” the newspaper said.

Although Venezuela sits on the largest oil reserves in the world, its economy is an almost unparalleled catastrophe. A recent study found that inflation is likely to hit 1 million percent by the end of the year, as basic food items and supplies become increasingly impossible for average citizens to buy because of price or scarcity.

Workers have been fired en masse and businesses around the country have been forced to close.

According to the Miami Herald, 40 percent of Venezuela’s stores have stopped doing business—perhaps permanently.

The devastation in Venezuela serves as only the most recent warning about the result of socialism and communism.

Though the ideology promises equality, fairness, and an end to hardship, in the end socialism leads to tyranny, exploitation, and uninhibited corruption.

It rots the soul of a nation.

And it should be a warning to us as well.

While American politicians such as Sen. Bernie Sanders and Alexandria Ocasio-Cortez promise us the moon if we will only tax the rich and embrace “democratic socialism,” this is what it truly means in practice.

Perhaps fortunately, when most people in America say they want socialism, they are really just saying they want a more aggressive version of progressivism, as David Azerrad, The Heritage Foundation’s director of the B. Kenneth Simon Center for Principles and Politics, explained in an interview with Fox News host Tucker Carlson.

Of course, those Americans may reconsider when they realize the price tag, which can’t be merely paid by taxing the wealthy, will come down hard on them.

Americans have been blessed to live in a country with a generally free economy and a strong rule of law, thanks to a culture that values those qualities and a Constitution that limits the scope of government.

There is no utopia, no panacea of perfect human equality. Just the corruption and deprivation that results from giving government unchecked power—a result of ignoring James Madison’s warning in Federalist 51.

If men were angels, we wouldn’t need government, Madison wrote, but because man is fallen—more than a beast but far from an angel—we “must first enable the government to control the governed.”

Then just as importantly, he wrote, we must “oblige it to control itself.”

Life in Venezuela, where the people starve and predatory leaders—who can’t or won’t control themselves—stuff their faces, is what it’s like under “real” socialism.

Perhaps we should finally heed this warning and banish forever the whimsical notions of socialism’s potential.