Millennials Are Clueless About Communism. Here’s Why That’s a Problem. 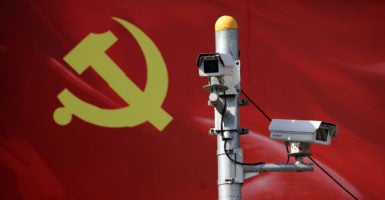 A recent poll found that about half of millennials said they would rather live under socialism or communism than capitalism. (Photo: Aly Song/Reuters /Newscom)

The collapse of the Berlin Wall and the Soviet Union ended the Cold War, but it didn’t end the ongoing battle of ideas between liberty and collectivism.

A recently released survey by the Victims of Communism Memorial Foundation revealed some disturbing facts about what millennials think of communism and socialism.

Some of the results are a little disturbing and could have big implications for the future of our country.

For instance, the poll found that about half of millennials said they would rather live under socialism or communism than capitalism.

The poll also found that nearly 1 in 5 millennials think Joseph Stalin was a “hero.”

“Millennials now make up the largest generation in America, and we’re seeing some deeply worrisome trends,” said Marion Smith, executive director for the Victims of Communism, according to MarketWatch. “Millennials are increasingly turning away from capitalism and toward socialism and even communism as a viable alternative.”

The findings of this study should be a wake-up call to those who think that communism is no longer a threat to the United States and the West. Young people, who had little personal experience with the half-century battle between Soviet tyranny and American freedom.

It is a sad indictment on a generation that grew up with more prosperity than any in human history would turn on the system that brought them there. Alas, socialism appears to be the opiate of prosperous utopians.

Perhaps in the decades of unchallenged international supremacy, Americans let their guards down to real threats to our way of life. We were lulled into a false sense of security about our future and have now fallen into the trap of bringing back dangerous doctrines that we have had the good fortune to escape.

Yet, apologies and even wistful nostalgia for the high tide of communist revolution are being peddled in the pages of mainstream liberal outlets like The New York Times.

The Times has shockingly featured a section called “Red Century,” which is all about the 100-year anniversary of the Bolshevik Revolution in Russia and its aftermath.

While the section has editorials about the evils of communism, it also features numerous pieces that actually celebrate or make excuses for it.

It has run a puff piece on Vladimir Lenin being an environmentalist, praised the sex life of women behind the Iron Curtain, and published flattering profiles of Communist Party organizers, among numerous other absurdities.

While it’s certainly reasonable to have a discussion of communism’s legacy, it’s jarring to see so many favorable columns devoted to the primary geopolitical existential threat to the United States in the 20th century.

As John O’Sullivan noted in National Review, the whole tenor of the section treats communism like “a noble experiment conducted in less than ideal conditions.”

One has to ask: Would the Times have had a similar section with glowing pieces about fascism at 100 years?

Of course not, and for good reason.

But this is part of a larger cultural normalization of a destructive creed that lay dormant but was never entirely extinguished in the last few decades.

And now its back in vogue.

It’s no wonder that so many millennials have a fanciful view of the ideology that took more lives than any other creed in human history, that destroyed civilizations, and nearly plunged the world into darkness.

This is a dire warning that we need to do a better job of educating young Americans about history and the blessings of liberty that have imperfectly, but ultimately, flourished in this country. Perhaps we need to see school choice and the revitalization of our education system as a higher priority.